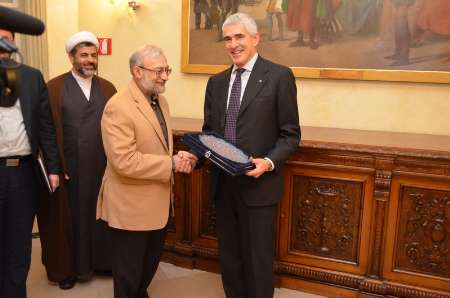 In a meeting with the chairman of Iran’s Human Rights Headquarters Mohammad Javad Larijani, he referred to the recent bill approved by the Senate on Syrian crisis.

He said the crisis in Syria could be settled only through diplomacy and dialogue.

He pointed to the special importance Italy attaches to ties with Iran and said he hoped for better mutual relations.

Larijani referred to Iran as the most stable country in the region and said Tehran has not only managed to confront evil incidents relating to Takfiri and Salafid terrorists but also assisted its neighboring countries to that end.

As to the Syrian crisis, he believed it could be solved only through direct voting of people because any other non-democratic plan could lead to further spread of violence and terrorism.

Larijani said Iran welcomes interaction and cooperation with all world countries but never yields to oppression.

He regretted that West is closing its eyes to crimes and cases of human rights violations in regional countries.

The Iranian official stressed the futility of media campaigns and one-way propaganda in human rights related issues and called for exchange of views in this area.

He said Iran believed in reactivating the process of talks with the European Union on human rights issues, adding that Italy, as the EU chairman, could play an effective role in this regard.