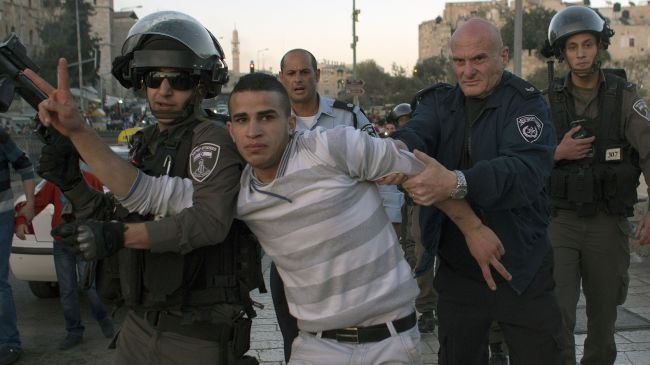 A Palestinian flashes the sign of victory as he is arrested by Israeli forces in East al-Quds (Jerusalem). (File photo)

Israeli forces have abducted more than a dozen Palestinian people in overnight operations on a number of houses across the occupied West Bank.

A Palestinian was arrested in the town of Beit Fajjar, situated eight kilometers (about five miles) south of Bethlehem, while an 18-year-old Palestinian, identified as Abd al-Rahman Naim Abd al-Rahman, was detained in the village of Deir Abu Mash’al, located 24 kilometers (15 miles) west of Ramallah.

The Palestinian Prisoners Society recently said Israel arrested as many as 549 Palestinians from East al-Quds and the occupied West Bank in November.

The NGO further delineated that the Tel Aviv regime’s arrests included 120 Palestinians from al-Khalil, 43 from Ramallah and al-Bireh, 34 from Bethlehem, 30 from Nablus, and 26 from Jenin.

It added that most of a group of 233 detainees from East al-Quds were minors who were released later. It added that the released minors were subsequently forced to pay fines or were put under house arrest.

According to latest reports, there are over 7,000 Palestinians in 17 Israeli prisons and detention camps. Among Palestinian prisoners behind Israeli bars, there are 18 women, 250 children, 1,500 sick detainees, who are mostly in a critical condition, and 540 Palestinians held under administrative detention without any trial.