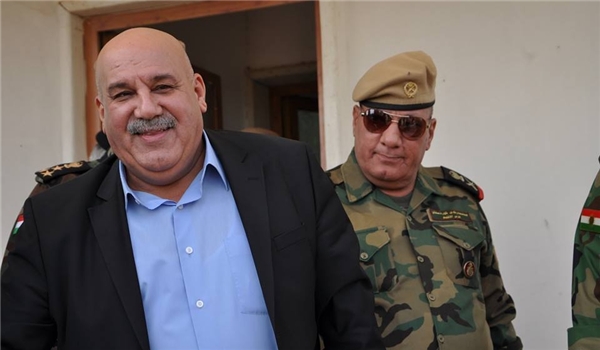 TEHRAN (FNA)- Spokesman of the Armed Forces of the Iraqi Kurdistan Region Jabbar Yawar appreciated Tehran for its assistance to Iraq in fighting the terrorist groups, describing Iran as a good ally.

Yawar hailed Iran’s anti-terrorism cooperation with Kurdish Peshmargas, and said Iran was a good ally of both Iraq and the Government of the Kurdistan Region.

Stressing that ‘very good’ relations have been established between Iran and the Government of the Kurdistan Region, he appreciated Iran’s cooperation in fighting terrorism.

In a meeting between Director-General of the Province’s Cooperative, Labor and Social Welfare Organization Massoud Aqlami and Head of the Association of Exporters-Importers of Iraqi Kurdistan Mustafa Abdurrahman Abdullah, the Kurdish official said that the Iraqi Kurdistan has so far concluded 30 protocols in the world, five of which belong to Iran.

He said Iraqi Kurdistan was resolved to sign a cooperation protocol with Hamedan Province in order to pave the way for the establishment of relations with tradesmen in this province.

Aqlami, for his part, said so far 80 contracts and memoranda of understanding had been signed between Hamedan Province and cooperatives and businessmen of Iraqi Kurdistan.

He said dispatch of a number of trade delegations to Iraqi Kurdistan and setting up of exhibitions were among measures which had been taken for expansion of interaction and trade with the Iraqi Kurdistan.