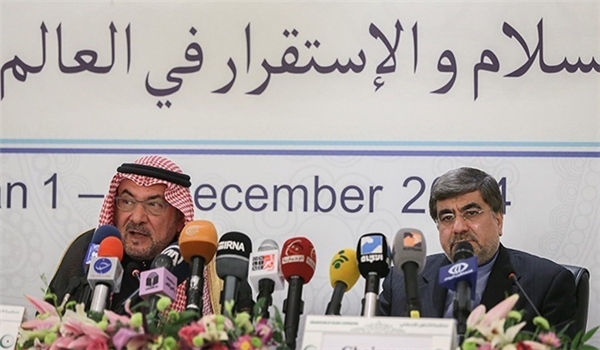 TEHRAN (FNA)- Iranian Culture Minister Ali Jannati warned of the spread of a new wave of Islamophobia by the arrogant powers through extending support for extremist and Takfiri groups in the Muslim countries.

Spread of terrorism, violence, radicalism and growth of Takfiri groups in the Islamic world and presenting an incorrect and altered image of Islam, which is practically supported by the western media, has formed a kind of Islamophobia in the West, Jannati, whowas also the cairman of the 10th Conference of Islamic Countries Information Ministers (ICIM) said in a joint press conference with OIC Secretary General Iyad Ameen Madani at the end of conference in Tehran on Wednesday.

Jannati added that disputes and religious and sectarian discords are among other problems which the Islamic world is suffering from.

In relevant remarks in September, Iranian President Hassan Rouhani warned against the spread of a new wave of Islamophobia and Iranophobia by the Zionist regime of Israel through supporting the extremist and Takfiri groups in the Muslim countries.

“We are moderate people and Islam is the religion of moderation not leaning towards left or right,” President Rouhani said in the World Mosque Day Conference in Tehran.

He also condemned Zionists’ propaganda against Iran and Islam promoting Iranophobia and Islamophobia across the world, calling the campaign baseless.