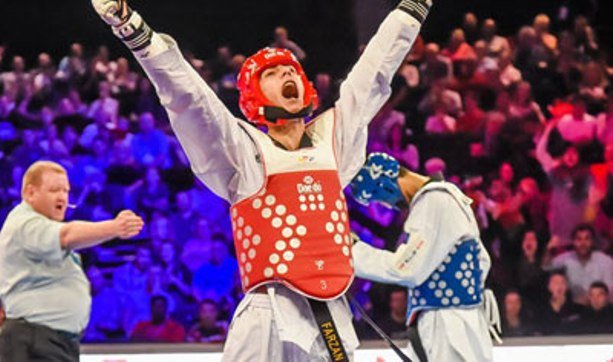 This round of competitions began on Wednesday in Mexico with the presence of world’s 64 top taekwondo practitioners from 27 countries.

On the first day of the tournament, Iranian fighters Farzan Ashourzadeh and Mehdi Khodabakhsh could grab two gold and silver medals respectively, with five wins and one defeat.

In the men’s under 58kg category, Iran’s Farzan Ashourzadeh encountered South Korea’s Taemoon Cha, claiming a 15-3 victory with 49 seconds remaining in the third round.

On route to the final, Ashourzadeh beat Portugal’s Rui Braganca and South Korea’s world number one Taehun Kim and grabbed a gold medal for Iran’s taekwondo family and added 80 points to his Olympic ranking.

In men’s under 80 kilograms, Mehdi Khodabakhsh overpowered the Olympic bronze medalist from England. In his next contests, he hammered British Lutalo Muhammad and Olympic gold medalist Sebastian Crismanich from Argentina on his way to the final.

In his battle for gold, Khodabakhsh encountered Albert Gann and lost to the Russian opponent 1-0, winning a silver medal for the Iranian Taekwondo Caravan. Sebastian Crismanich pocketed bronze medal and Adriano Rosie from Mexico ranked the fourth in this weight category at the World taekwondo Grand Prix in 2014.