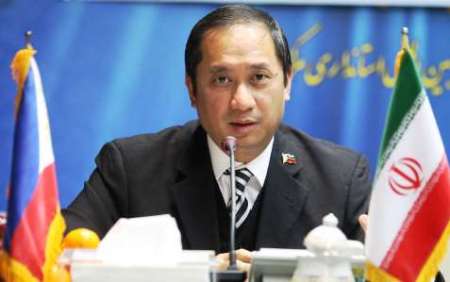 Speaking at the session of the workshop for promotion of exports from Markazi Province, the Filipino diplomat said making investment in agriculture and tourism sectors area among major privileges that will increase the level of bilateral relations.

He said Iran due to its specific geographical and climatic conditions and taking advantage of the four seasons can play a significant role in the markets of the Philippines in presenting agricultural products.

He further remarked that Iran by taking advantage of capacities of small industries and growth of economic indices while relying on the development of non-oil exports can set a good pattern for other countries.

He referred to the welcome his country has shown in broadening trade relations between Tehran and Manila and said in future months a high-ranking economic delegation comprising tradesmen of the Philippines will arrive in Tehran for examining mechanisms for investment in Iran.

The ambassador of the Philippines said that formation of joint Iran-Philippines trade delegations while helping development of trade and industrial ties will render a remarkable assistance to the development of tourism industry in both the countries.

He expressed the hope that with finalization of Iran’s nuclear talks expansion of economic activities between Tehran and Manila will be witnessed.