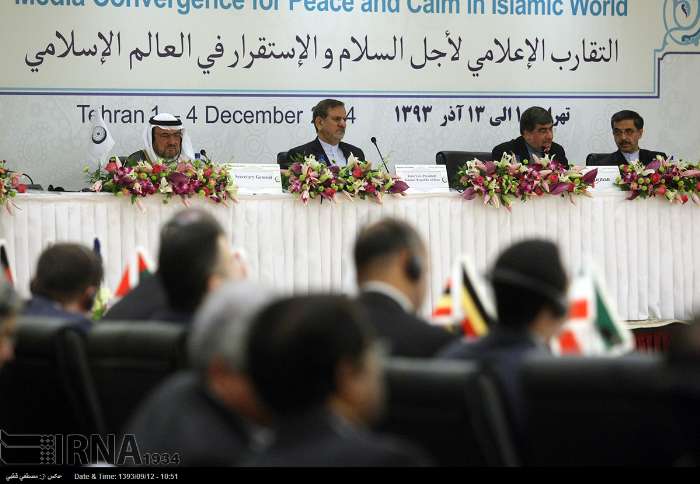 He added that the violent acts by the terrorist groups committed under the name of Islam are disseminated widely by these media, contributing to their targeted Islamophobia campaigns.

He made the reamrks while addressing the opening ceremony of the 10th Session of the Islamic Conference of Information Ministers (ICIM).

He underlined the importance of the conference in promoting unity and solidarity among the Islamic countries in the face of challenges they confront.

The theme chosen for this conference on “Media convergence for Peace and Calm in Islamic World”- is indeed quite a considerate, important and timely one, he noted.

President Hassan Rouhani, during his address to the 68th Session of the United Nations General Assembly, called upon the international community to a “World against Violence and Extremism”, he said, adding that only a year after his call, the Middle East, already stricken by continued occupation and crimes committed by the Zionist regime against Palestine and Palestinians, now is facing waves of violence, extremism and terrorism, particularly in Syria and Iraq.

The Zionist regime’s relentless inhumane blockade and repression of Palestinians in the Gaza Strip and the rest of Palestine continue to anguish Muslims throughout the World, the VP said, adding, ‘Indeed, what we witnessed during the recent criminal acts of the Zionist regime in the Gaza Strip was nothing but violation of basic principles of human rights and crimes against humanity. The ferocious attacks of this regime to Gaza during the last summer and the holy month of Ramadan were committed with the purpose of targeting the Gaza civilians. Even safe shelters including United Nations schools were not immune from these assaults. The world will never forget the bitter memory of 800 innocent children victims of the attacks.’

Though, the despotic nature and structure of the international politics has accorded immunity to this criminal regime, responsible media and brave reporters throughout the world, carried out their humane and professional responsibilities, by giving voice to the oppressed Palestinians and echoed their sufferings to the world public opinion, he stressed.

Today the Zionist regime’s attempts to construct further Israeli settlements in the occupied territories, its planned intrigues for judaization of Jerusalem and imposition of a variety of restrictions on entering the Al-Aqsa Mosque, are all but efforts to destroy Islamic symbols and Muslims’ religious, cultural, civilizational and political identity, he further noted.

Under these circumstances, media outlets especially those in the Islamic countries play a pivotally historical role, Jahangiri said, adding that the Organization of Islamic Cooperation which was basically established to defend the cause of Palestine, by utilizing all its potentials including through its media leverage, plays a key role in highlighting further the situation in Palestine and confronting criminal acts of the Zionist regime.

Elsewhere in his speech, he said terrorism and violent extremism has turned to one of the most significant challenges facing the great Islamic Ummah.

Today the ruthless violent acts committed by the ISIS in Syria and Iraq against Sunnis, Shiites and followers of other divine religions and ethnic groups has caused anguish among all free human beings, the VP said, adding that the abuse of media and modern information technologies by this terrorist group to propagate its vicious mindset and to justify its cruel acts, remind us of our responsibilities under this very important domain.

The threat of violent extremists is indeed a threat against the whole Islamic Ummah, the Islamic World and world community as a whole, he said, ‘We, therefore, need to collectively commit ourselves to cooperate in our fight against violence and extremism.’

The Islamic countries’ support for the new government in Iraq and for the measures it undertakes against terrorist groups in order to protect unity and territorial integrity of Iraq is of high importance, he said.

On the situation in Syria, the developments on the ground indicate that the crisis therein has no military solution, he said, adding, the Islamic Republic of Iran has insisted from the very beginning on a political Syrian-Syrian solution and still considers it as the only way out of the current unfortunate situation.

Lauding the role and objectives of the Organization of the Islamic Cooperation, he said, OIC is expected to proactively voice concerns and interests of the Islamic Ummah at the international level. ‘As an active member of OIC, the Islamic Republic of Iran is committed to contribute this important undertaking in cooperation with other member states.’

He called on the Islamic World to be creative, united and progressive in increasingly employing information and communication technologies to be able to bridge the existing media and information gaps. Strategic and effective potentials of media should be fully tapped to wipe misperceptions out and communicate the true image of Islam and its sublime values and principles, the VP noted.

A significant portion of such efforts should be devoted to developing effective interactions with Western media to give voice to the Islamic Ummah and true face of Islam and its inspiring values of brotherhood, benevolence, tolerance and justice, Jahangiri said. ‘We are of the view that interaction and dialogue shall carry empathy and understanding, hence, bring hearts closer to each other.’

Mindful of the significant role that media play, the OIC can play an effective role in developing joint mechanisms to empower media in the Islamic countries to enable them undertake responsible and uniting measures in support of cultural and spiritual values of the Islamic communities, he reiterated. ‘Indeed, efficient functioning of any joint Islamic action in the area of information and media depends to a great extent on effective national policies and availability of information and communication technologies as well as infrastructures in the member states.’

Underlining the importance of unity and solidarity of all Muslim states, Jahangiri hoped that the conference would bear positive and tangible results for taking information and media as effective and functional means in advancing Islamic unity and solidarity to new heights.