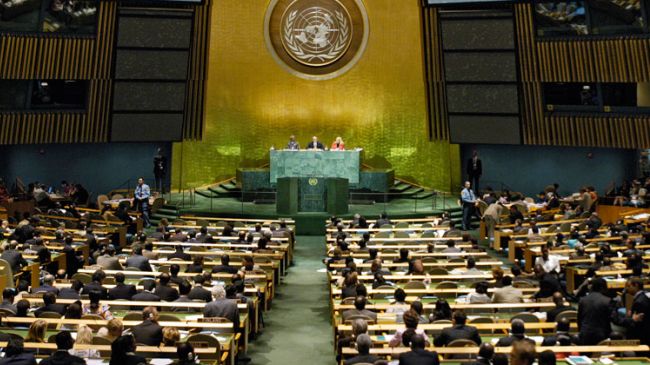 The assembly approved of the resolution in a 161-5 vote, with 18 countries abstaining, on Tuesday.

The United States and Canada were among the countries that opposed the resolution.

The resolution urges the Tel Aviv regime to join the NPT and put its nuclear facilities under the safeguard of the UN’s International Atomic Energy Agency.

The resolution, which is backed by 18 Arab countries, also expresses deep concern over Israel’s nuclear capabilities.

The Tel Aviv regime, which is widely believed to be the only possessor of nuclear arms in the Middle East, reportedly maintains between 200 and 400 atomic warheads.

Furthermore, Israel has never allowed any inspection of its nuclear facilities and continues to defy international calls to join the NPT.

Hans Blix, the former head of the IAEA, said in an exclusive interview with Press TV that he is convinced Israel possesses nuclear weapons.

He demanded that Israel join the NPT, saying Tel Aviv’s refusal to sign international nuclear treaties and its deliberate ambiguity policy with regards to its nuclear program are because of support from Washington.

A released report in the Bulletin of the Atomic Scientists also confirms that Israel possesses at least 80 operative nuclear warheads and has enough material to produce up to 190 more.

Nuclear weapon proliferation experts Robert Norris and Hans Kristensen estimate in the report that Israel halted its production of nuclear warheads back in 2004 “once it reached around 80 munitions.”