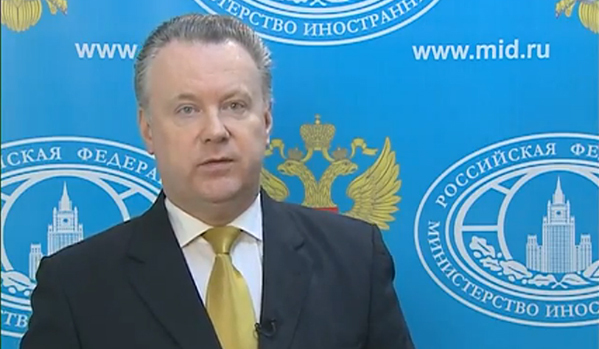 A high-ranking Russian diplomat says Russia supports organizing bilateral talks between delegations of the Syrian government and the foreign-sponsored opposition in order to put an end to the almost four-year-long militancy in Syria that has claimed more than 200,000 lives.

“Moscow believes it has to assist Damascus in countering terrorism and to support the efforts aimed at achieving a political settlement of Syria’s domestic issues based on the principles of the Geneva communiqué of June 30, 2012, through an inclusive dialogue without any preconditions or external dictation,” Russian Foreign Ministry spokesman Alexander Lukashevich said on Wednesday.

He further called upon all opposition forces to attend the talks, emphasizing that participation should not be limited to the so-called Syrian National Coalition.

The remarks come as the Syrian government and several foreign-backed opposition groups have agreed to resume peace talks mediated by Russia.

Reports said on Tuesday that both sides have confirmed the initial agreement, which followed talks between delegations led by key opposition figure, Ahmed Moaz al-Khatib, and Syrian Foreign Minister Walid al-Muallem in Moscow in November.

Earlier on Tuesday, Khatib, leader of the so-called Syrian National Coalition, called for direct talks with the Syrian government.

“It is in the Syrian people’s interest for us to sit down together once and for all, and to find a way to save the people from this pain and suffering,” he said.

Khatib went on to say that it would make sense for Syrian President Bashar al-Assad to stay in power for a limited time and then resign on a later date.

The opposition and its Western supporters insist that Assad must resign and a transitional government be formed in Syria.

Russia is among the countries that support president Bashar al-Assad’s government.