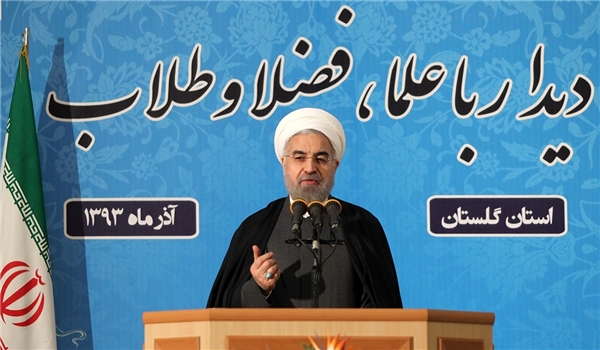 “Iranophobia has decreased now compared with the last few years. They (the enemies) had launched a propaganda campaign to show Iran and Islam as the symbols of violence, but all countries have now voted for (Iran’s) plan to create a world without violence and extremism,” Rouhani said in a meeting with senior clerics and seminary students in the Northern province of Golestan on Wednesday.

He also announced Iran’s plans to hold a major conference on fighting violence and extremism, and said, “Holding the conference will be a great honor for Iran.”

On September 25, 2013, President Rouhani proposed “the WAVE” initiative in his address to the UN General Assembly meeting in New York.

On December 18, 2013, the UN General Assembly overwhelmingly voted to approve President Rouhani’s proposal, which called on all nations across the globe to denounce violence and extremism.

On December 20, 2013, Iran offered to host an international conference on UN resolution adopted based on President Rouhani’s WAVE initiative.

In September, President Rouhani underlined that he was determined to put the UN resolution on “WAVE” into effect during the 69th annual session of the UN General Assembly in New York.

“Last year (the threats and dangers of) violence and extremism were proposed (by Iran) as one of the significant issues of the world,” Rouhani told reporters upon arrival in New York’s John F Kennedy Airport on September 22, adding, “I hope this year we will discuss the issue and the ways to counter it as well.”

“We introduced violence and extremism as important problems of the world,” President Rouhani reiterated.