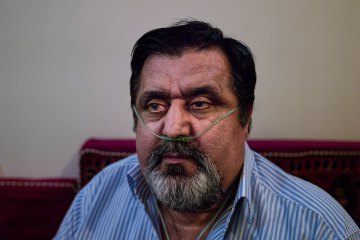 Introduction to this story by the UN Resident Coordinator in Iran
The United Nations, in its mandate to promote peace, has ardently opposed the use of chemical weapons.

In September 1982, the UN General Assembly accepted the annual report of the Conference on Disarmament, which contained what later became the Chemical Weapons Convention (CWC).

The CWC – which outlaws the production, stockpiling and use of chemical weapons and their precursors – came into force in 1997 and is administered by the Organization for the Prevention of Chemical Weapons in The Hague.

The CWC bears great significance for Iran, whose people were subjected to these heinous weapons during the Iran-Iraq War (1980-1988).

Today, the victims of the sulphur mustard gas attacks continue to suffer from the consequences.

The UN office in Iran and UNIC are proud of their friendship with the Tehran Peace Museum, where many of these victims share their stories and experiences.

Sadly, one of our friends died recently.  Here is his story.

Ahmad Zangiabadi died two weeks ago.  The day was Tuesday, the 18th of November 2014.  He was 49 years old.  The cause of his death was respiratory collapse.

Ahmad was born in Kerman on the 9th of April 1965, into an ordinary Iranian family.  But when the Iran-Iraq war started in 1980 over a territorial dispute, he followed the well-trodden path chosen by patriotic young men from across the ages.  He volunteered to join the army and went off to defend Iran.

Ahmad as a young volunteer soldier in 1982. (Photo courtesy of Tehran Peace Museum)

Ahmad spent his military career on the southern front defending Iran’s control of the Arvand River – the Shatt al-Arab – where he was a member of the volunteer army’s logistics unit.

“In 1984,” said Ahmad in an interview before his death, “Iraq was dropping chemical bombs on our troops.  We didn’t even know what chemical bombs were.”

On the 12th of April 1985, Ahmad was positioned with his unit in the Tala’ie region of the Majnoon Island when Iraq dropped a sulphur mustard gas bomb on his position.  He was then only 19 years old.

When people are exposed to sulphur mustard gas, in more than 95 per cent of cases they don’t die. Most associated deaths occur either as a result of the explosive blast itself or when the patients – in a condition of vulnerability and exposed to liquid chemicals – are being transported to medical facilities. The real trauma and tragedy come afterwards. The symptoms of mustard gas are slow-onset. Many veterans have told of feeling quite well for some time even after the explosion. Ahmad was no different, and it was not until several hours after the attack that he began to feel unwell.

“With each laboured breath, Ahmad described his role at the Tehran Peace Museum and shared the experiences of survivors like him”

“It was about 10pm in the evening,” Ahmad recalled, “when I first realized that something was wrong.  I guessed that I had been exposed to chemicals.  I asked someone to replace me at the front so that I could go to the medical centre.”

Ahmad’s condition rapidly worsened.  His eyes were severely burned and he started vomiting violently.  His entire body began to break out in burns and blisters.

“I was taken to Tehran to a hospital,” said Ahmad, “and I lay unconscious for about 40 days.”

Ahmad slowly began to understand that his lungs had been damaged permanently and for the next 30 years his life would be dependent on medication, hospitalization and a series of oxygen machines.  After the war, Ahmad got married.  In time, Ahmad’s wife, Marzieh, would be his loyal and dedicated nurse, administering his medication, helping him with his oxygen machines and making life as comfortable as possible for him.

After the war, Ahmad tried to further his education and enrolled at a local university to study English literature.  However, the sulphur mustard had burned his cornea and his eyesight had rapidly deteriorated.  His lung condition worsened and after falling into a coma and being hospitalized, he was forced to give up any hope of continuing his studies.

As one of over 100,000 survivors of chemical warfare in Iran from the war with Iraq, Ahmad sought for himself a role in helping other survivors.  He joined a non-governmental organization, the Society for Chemical Weapons Victims Support (SCWVS) later becoming a board member.

In 2007, Ahmad began a career as a volunteer guide at The Tehran Peace Museum. As an eyewitness and survivor, Ahmad escorted visitors around the museum and gave first hand accounts of the terrible consequences of chemical weapons. He served as living testimony to the open wounds – both literal and metaphorical – still troubling war veterans, civilians and many people who continue to be affected by secondary contamination from sulphur mustard.

A committed campaigner for peace, Ahmad travelled with delegates from the Tehran Peace Museum to The Hague in April 2013. The group attended the Third Review Conference of the Chemical Weapons Convention at the Organization for the Prevention of Chemical Weapons (OPCW). While moving around with his portable oxygen machine, Ahmad was honoured to meet the Secretary General of the United Nations, Mr. Ban Ki Moon, and the OPCW’s Director General, Mr. Ahmed Üzümcü and asked them to double their efforts to make a world free of chemical weapons.

With each laboured breath, Ahmad described his role at the Tehran Peace Museum and shared the experiences of survivors like him. Sadly, within the last year of his life, Ahmad’s respiratory condition worsened.

“I am a candidate for a lung transplant,” he said, “my lungs were burnt so badly that they can’t provide my body with the oxygen it needs.”

Ahmad did not live long enough to receive the lung transplant.  His dream of taking deep breaths would not come true.

Ahmad Zangiabadi is survived by his widow, Marzieh, and his only son, Hesam.

But through his work and the lives he touched, Ahmad’s story will live on and his tireless campaigning to see a world free of chemical weapons will be remembered.