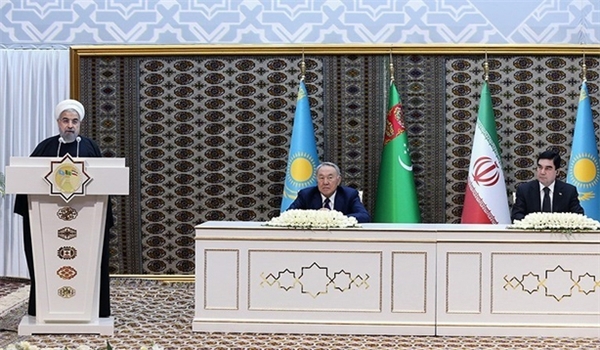 “Our nations want us to prepare the ground for the nations and governments of this region, specially these three neighboring states (Iran, Turkmenistan and Kazakhstan) which are located right beside the beautiful Caspian sea to come closer and more integrated,” Rouhani said in the Northern province of Golestan on Wednesday, addressing a ceremony to inaugurate the joint railway linking Iran to Turkmenistan and Kazakhstan.

He underlined that the three countries of Iran, Turkmenistan and Kazakhstan enjoy lots of cultural and religious commonalities despite their complete independence, adding that such unity and closeness is rare in the history of different states.

The joint railway linking Iran to Turkmenistan and Kazakhstan on the Eastern side of the Caspian Sea came into operation on Wednesday morning.

The inauguration ceremony of the troika railway was held at the presence of Iranian President Hassan Rouhani and his Turkmen and Kazakh counterparts in Inche-Boroun on Iran-Turkmenistan joint borderline.

The railway route connects the Commonwealth of the Independent States (CIS) countries to the Persian Gulf and the South East Asian nations.

In October, President Rouhani emphasized the need for relevant officials to pave the ground for faster implementation of joint railroad projects with the neighboring countries, particularly with Turkmenistan, Kazakhstan, and Afghanistan.

President Rouhani urged officials in charge to complete the Iran-Turkmenistan-Kazakhstan and the Khwaf-Herat (between Iran and Afghanistan) railways maximum within the next few months.

In May, Head of Iran’s Railroad Organization Mohsen Pour Seyed Aqayee underlined the country’s transit potentials, and expressed the hope that expansion of transit cooperation among the regional states would bring about economic boom in the entire region.

Speaking at the 60th meeting of railroad transport council of the Common Wealth Countries, Pour Seyed Aqayee stressed Iran’s capabilities and potentials for goods transit via South-North and East-West corridors, and called for further cooperation among states.