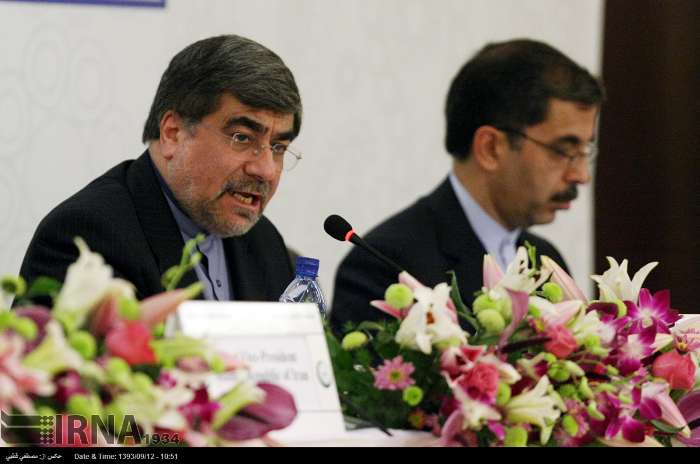 Tehran, Dec 3, IRNA – Minister of Culture and Islamic Guidance Ali Jannati said here on Wednesday that the Islamic Republic of Iran is fully committed to the objectives of the OIC in promoting media convergence and will spare no effort to cooperate and support to this cause.

Jannati made the remarks while addressing the opening ceremony of the 10th Session of the Islamic Conference of Information Ministers (ICIM).

The full text of his address is as follows:

“Those who deliver the messages of Allah and fear Him, and do not fear anyone but Allah; and Allah is sufficient to take account” (Holy Quran, Surah Al-Ahzab, Ayah 40)

Your Excellency, Dr. Jahangiri, distinguished First Vice-President of the Islamic Republic of Iran,

At the outset, I would like to welcome you the honorable ministers and distinguished guests to the 10th session of the Islamic Conference of Information Ministers, to the Islamic Republic of Iran. I sincerely am grateful to H.E. Mr. Iyad Madani, distinguished Secretary-General of the OIC, for his tireless endeavors to promote cooperation and solidarity among the OIC member states. My appreciation goes also to the colleagues at the secretariat for organizing this event. This timely conference provides the honorable ministers and other participants with a good opportunity to discuss and exchange views on the most important challenges and opportunities facing the Islamic world.

We convene here at a time of numerous challenges in front of the Islamic world and in particular the Middle East region. Challenges that are posed by extremism, violence, terrorism, military invasion, violation of national sovereignty of the states, occupation, accompany by massacre of innocent children, women and men. This has caused serious concerns among the Islamic Ummah. It is quite unfortunate that many of these crimes are committed under the sublime name of Islam, to tarnish the true and enlightening image of our religion.

Continued atrocities, crimes and repression by the occupying Zionist regime against the oppressed Palestinians are clear expression of the distressing conditions we deal with. Recent unprecedented killings and devastation in the Gaza Strip constitute a clear case of war crimes and crime against humanity, perpetuated by the Zionist regime. More special is silence of the International Community and human rights circles against these crimes. Under these trying circumstances the Zionist regime has stepped up its aggression against the al-Aqsa Mosque as well as its Judaization policy of al-Quds, coupled with destruction of its civilizational spots.

Extremism and violence, the main source of crisis in our region, has added to our pains. Continued terrorist attacks in Iraq and Syria has inflicted devastating impact on innocent civilians and their infrastructures. Worrying is the potential of further expansion of terrorism and extremism, as a real threat to regional security and stability. Indeed true Muslims across the world, continue to denounce these criminal acts, motivated by extremism and violence. Today, it is all but critical to confront these groups and their dangerous ideologies which have nothing to do with the Islamic principles and values.

Unfortunately, these dreadful developments have further stimulated advancement of the Islamophobia project by the Western media. Forged affiliation of these groups to Islam has now become instrumental to their campaigns. These actions do not lead to salvation of humanity. They, however, add to divides, in particular, among the Islamic Ummah, the outcome of which is waves of conflicts and devastating wars, prevailing already in some regions.

Our common responsibilities are heavier than before. Under this trying situation, the Islamic world is in dire need of solidarity, unity and cooperation. It is critical to commit to “hold fast by the covenant of Allah all together and be not disunited”. The main source of strength of Islamic Ummah is its unity. The global and regional challenges that face the Islamic world require our collective actions. The OIC, on the basis of the principles and noble objectives enshrined in its charter, has a lot to offer for promotion of Islamic solidarity. The Organization can take on numerous and diversified activities for realization of aspirations of the Islamic Ummah. Through increased efficiency and effectiveness, the role that OIC plays in regional and global developments can take new heights. Indeed our Organization has been at the centre of all the endeavors of the Islamic Ummah to achieve peace and development.

The Islamic Republic of Iran, as a founding member of the OIC, is committed to the noble objectives of the Organization and supports its activities for promotion of cooperation among the member states. We, from the beginning of the Islamic Revolution, have contributed to unity, promotion of the rich Islamic culture, understanding and peace in the Islamic world. On this basis, the Islamic Republic of Iran has always upheld the collective interest of the Islamic Ummah towards creation of a more stable world. In this regard, I would like to recall the initiative of H.E. President Rouhani, on “World Against Violence and Extremism” which has received wide support of the international community, and in particular Muslims throughout the world. Undoubtedly, the initiative has now become more meaningful, considering the increasing threat of violence and extremism for international peace and security.

We convene here under the theme of “Media Convergence for Peace and Calm in the Islamic World”. In today’s world, the crucial role that media plays and its impact on international developments cannot be overemphasized. Globalization of media has enormously contributed to availability of information in the cyber space. This has serious bearings on shaping private and social life of the individuals and relations among countries as well. Targeted dissemination of information and the monopoly that is exercised over media and cyber space has helped certain western media to project misperceptions about Islam and Muslims. Such actions have intensified discrimination and injustice against Muslims in the non-Islamic countries.

I firmly believe that in spite of extensive religious and cultural commonalities, the Islamic world still suffers from lack of adequate knowledge on media and ways and means of bridging the information gap. The Islamic countries should strengthen their information and media inter-linkages in an effective way, to be able to confront attempts that are targeted towards widening divides. We believe none of the Islamic countries can alone confront these challenges. Under these circumstances, joint action and collaboration is the only viable solution for ensuring a bright future for the Islamic Ummah. Indeed, cooperation is not an option, it is a requirement.

To establish peace and moderation and confront extremism and violence, we should seriously transform our media to effective and influential institutions. Therefore, enhancing professional relations among media circles in the Islamic countries at various continental, regional and sub-regional levels is critical.

OIC is indeed instrumental for attaining these objectives and should use its extensive capacities for undertaking relevant comprehensive and practical measures. It is a suitable framework for our collective and multilateral response to the complex media challenges facing the Islamic Ummah. In this respect, finalizing the restructuring process of the Islamic News Agency (IINA) as well as the Islamic Broadcasting Union (IBU) and establishment of the satellite network of OIC which has remained long on our agenda, is of utmost importance.

To conclude, I would like to reiterate that the Islamic Republic of Iran is fully committed to the objectives of the OIC in promoting media convergence and will spare no effort to lend its cooperation and support to this cause.

I take this opportunity to express my sincere wishes for successful conclusion of this Conference, with blessings of Allah the Almighty and active participation of the distinguished delegates and cooperation of all participants. I wish you all a fruitful meeting and happy stay in Tehran.

Thank you for your kind attention.