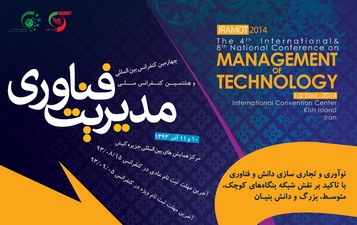 With the motto “Innovation in sciences and technology and their commercializing” and emphasis on the role that the network of small, medium and large sized science-based companies can play in those respects, the international conference ended its activities in the Persian Gulf Hall of the Kish Island’s International Gatherings Center.

The conference also focused on documentaries on the national and international experience in the field of sciences and technology.

Eighteen of the 234 articles received at the secretariat of the conference were presented as lectures, and 75 of them as poster presentation. 11 of the lectures were by foreign participants and seven by Iranian researchers.

The jurors did not praise any of the foreign presentations, but two of the Iranian researchers were praised for their works.

The top two papers of the conference were presented by Kamran Baqeri and Hadi Nilforoushan.