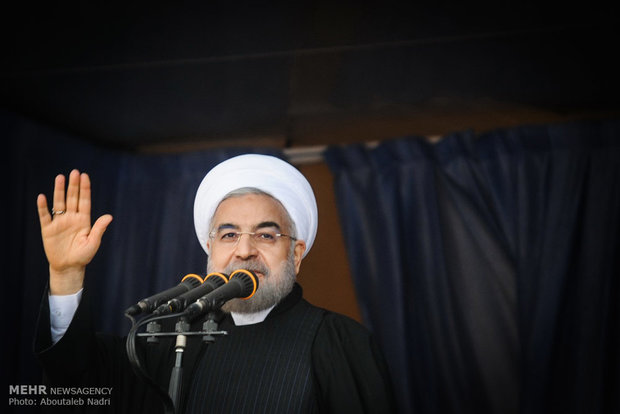 Upon his arrival at Gorgan Airport, President Rouhani told reporters that the troika railroad which connects the east of the Caspian Sea to countries of Central Asia can greatly improve the political, economic and developmental ties.

Hassan Rouhani and his cabinet members will inaugurate the troika railroad on Wednesday, along with two other presidents of Turkmenistan and Kazakhstan.

Gorgan-Inche-Boroun railroad connects three countries; it is 908km, with 88km built in Iran, 120km in Turkmenistan, and longer 700km in Kazakhstan, and flanks the east of Caspian Sea, connecting CIS railroad to Persian Gulf and Southeast Asian countries.

Speaking among the people of Golestan Province in his tenth so-called provincial visits, Rouhani referred to Iran’s nuclear deal and said, “we will bring the nuclear talks to a positive conclusion on our way of constructive interaction with the world. Have no doubt that the G5+1, the western and eastern world as well as the regional states all need to maintain this constructive interaction with Iran, both for security issues and economic boost.”

“In the last 15 months, at least 15 important steps toward a nuclear agreement have been taken,” said Rouhani, “we are now at the point where the world has accepted our terms on the nuclear issue.”

“They have now accepted that enrichment will be carried out within Iran’s territory. They have accepted Arak nuclear plant to have a heavy water reactor. They have agreed to our terms in regard to Fordow enrichment plant,” he said.

While asserting that the termination of sanctions is the absolute right of Iranian people, he added, “the world has now accepted that the days of cruel sanctions against Iran is coming to an end. Have no doubt that Iran will succeed and we will enjoy much better conditions next year as compared to this year.”