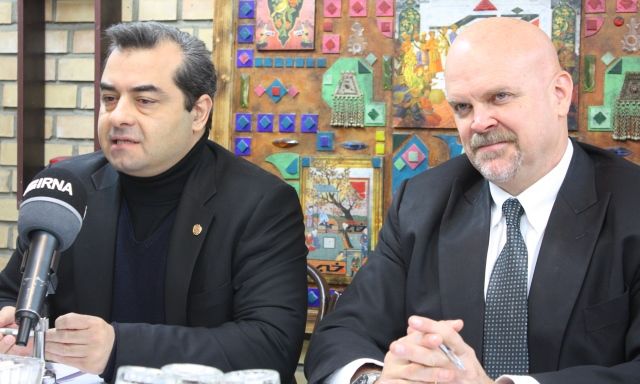 World AIDs day 2014: an opportunity to close the gap

In the run up to the World AIDS Day (WAD), on 29 November 2014 a media conference was hosted by Khabaronline in which the UN Resident Coordinator in the I.R.Iran, Mr. Gary Lewis, and the UNAIDS Country Director, Dr. Fardad Doroudi participated.

The status of the HIV/AIDS in the world and in the Islamic Republic of Iran, national measures made so far in order to contain the pandemic, and global and national targets set for the post-2015 and 2030 were discussed in this media exchange. Representatives of the several Iranian news agencies and print media asked their questions on the topic.

Opening the event, the UN Resident Coordinator in the I.R. Iran, Mr. Lewis referred to the Millennium Development Goals (MDG) and other efforts made by the international community in addressing the problem of HIV. He said that, although the cycle of HIV infections has been bent by these measures, it has not been broken yet. However, he added, ‘My message today is one of optimism because I believe that whereas we used to aim at halting and reversing the spread of HIV, we can actually end it by the year 2030.’

Outlining the steps to Close the Gap , Mr. Lewis also touched on the status of the responses made against the infection in Iran to which the UN family has contributed, such as supporting the Government’s efforts to move from its third national strategic plan to the fourth, emphasizing the key populations and treatment scale up, and preventing mother-to-child transmission. He praised the role of the civil society in addressing HIV/AIDS particularly through establishing the positive clubs across the country. To read the full text of the UN Resident Coordinator’s opening statements, please click here.

In reply to the questions raised by the journalists, UNAIDS Country Director, Dr. Fardad Doroudi said that the country response to HIV/AIDS follows an intersectoral approach under the leadership and coordination of the Iranian Ministry of Health (MOH), while other ministries and organizations such as the Education Ministry, Prisons Organization, as well as civil society have been actively involved. Emphasizing the importance of Mother to Child Transmission (MTCT) of HIV, Dr. Doroudi said, ‘The UN Family in Iran, and particularly the Global Fund to Fight AIDS, Tuberculosis and Malaria (GFATM) through UNDP Iran’s Health cluster, have assisted equipping the Iranian Blood Transfusion Organization with the most modern refining technologies that have actually eliminated the risk of one out of the four transmission ways in Iran.’ He added, ‘We hope the next target would be reducing MTC to zero by 2020.’ Dr. Doroudi underlined that the coming five years serve as the window of opportunity for all to achieve this goal.

World AIDS Day is globally celebrated on December 1st each year. It has become one of the most recognized international health days and a key opportunity to raise awareness, commemorate those who have passed on, and celebrate victories, such as increased access to treatment and prevention services.