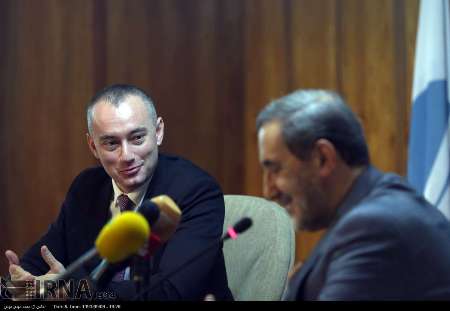 Tehran, Nov 30, IRNA – We believe Iraq should not be left alone under the prevailing sensitive conditions, as we need to help that country till its problems will be resolved, said the UN Secretary General’s Special Envoy for Iraq Nicolay Mladenov here Sunday.

“During my visit of Iran I will try to find out about the Iranian officials’ approach about cooperation with the UN aimed at preserving security in Iraq,” said Mladenov after his Sunday evening meeting with the Leader’s Adviser for International Affairs Ali Akbar Velayati.

Ban Ki-moon’s special representative said that in his talks Velayati, who is also head of Strategic Research Center of the Expediency Council, he had discussed various issues related to the establishment of security in Iraq and preserving it.

“We also surveyed various strategies in that respect and came up with the conclusion that Iran and the UN can in various fields cooperate in their anti-terrorism campaign,” he added.

Mladenov said that before arriving in Tehran he had met the officials in the capital cities of some other neighboring countries of Iraq, adding that his visits of the regional countries will also continue after leaving Iran for the same purpose.

“After the establishment of a national unity government in Iraq we notice that the various Iraqi tribes and political parties have representatives in the Iraqi government and we need to seek ways for easing various worries in that country,” he said.