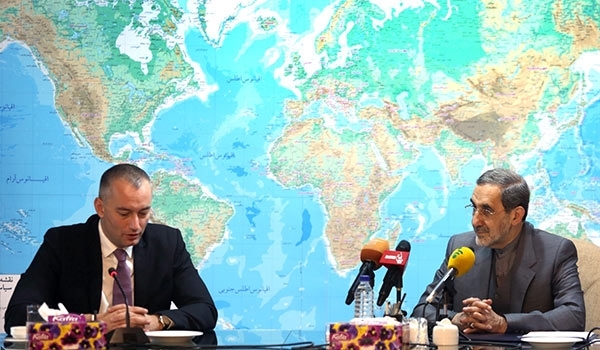 TEHRAN (FNA)- Iranian Leader’s Aide for International Affairs Ali Akbar Velayati voiced satisfaction in the wise approach of the Iranian nuclear negotiators in their talks with the six major world powers, and called for the continuation of the talks to cut a final deal before the new deadline, in July, 2015.

“Our country’s nuclear negotiation team has thus far observed all redlines drawn by the Leader of Revolution and they have spent tremendous effort, which are worth appreciation,” Velayati said in a meeting with UN Secretary-General’s Special Envoy for Iraq Nicolay Mladenov in Tehran on Sunday.

Velayati reiterated that some people might argue that the nuclear negotiations are quite useless, while some others believe they are pretty useful, but everyone should know that remarks of Supreme Leader of Islamic Revolution Ayatollah Seyed Ali Khamenei are the final words on every issue.

“Therefore, when Ayatollah Khamenei said that he agrees with the negotiations and with their continuation, arguments against the nuclear negotiations should not be made,” reiterated Velayati.

After the last week talks, Iranian Deputy Foreign Minister and senior negotiator Seyed Abbas Araqchi announced that major differences were still in place between Tehran and the world powers, including the details of Iran’s enrichment program and mechanisms for removal of the sanctions.

“The issue of enrichment and its limits, extent and capacity, as well as the mechanisms needed for the removal of sanctions are two key issues,” Araqchi said.

Iranian Foreign Minister Mohammad Javad Zarif and EU coordinator Catherine Ashton announced last Monday that the talks had been extended until July 10, and the world powers had taken up to release $700 million of Iran’s frozen assets on a monthly basis.