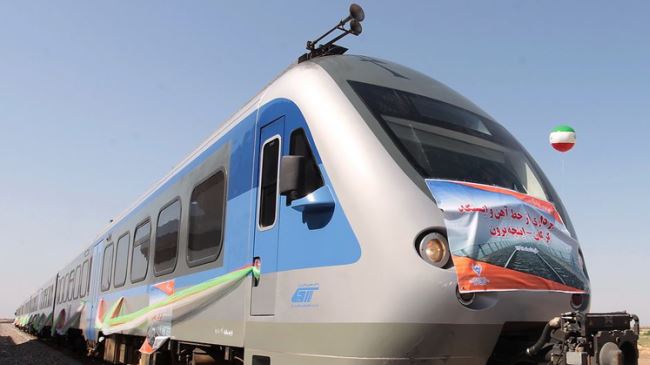 The file photo shows a train on Gorgan-Inche Boroun railway in northern Iran.

A senior Iranian official says the East Caspian Sea railway project between Iran, Turkmenistan and Kazakhstan will prove that sanctions against Tehran have failed to affect the Islamic Republic’s ties with regional countries.

“The inauguration of this huge project will prove that cruel international and unilateral sanctions [against Tehran] have had no impact on regional countries’ desire for the expansion of cooperation with Iran,” Presidential Office’s Deputy for Communications and Publicity Parviz Esmaeili said on Monday.

He added that the Islamic Republic’s strategy is based on multilateral cooperation with the purpose of improving regional security.

The North-South rail corridor will link the Kazakh city of Uzen to the Iranian city of Gorgan in northern Golestan Province, he noted.

The Iran-Turkmenistan-Kazakhstan railway will cut around 10,000 kilometers of the route for international transportation between East (from China to Central Asia) and West (Western Europe countries).

Iran-Turkmenistan-Kazakhstan railway will become operational on Wednesday in the presence of the presidents of the three countries.