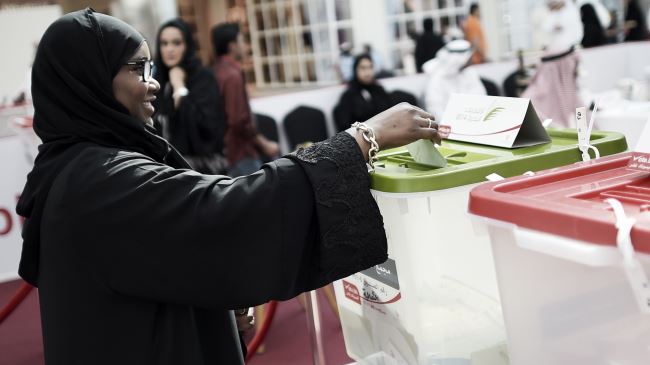 A Bahraini woman casts her vote at a general polling station in the capital Manama, on November 28, 2014.

Bahrain’s government has resigned after announcing the results of the runoff parliamentary elections in the country.

Prime Minister Prince Khalifa Bin Salman Al Khalifa said on Saturday that the decision was made “based on Article 33 of the constitution that stipulates that the government should resign at the beginning of each new legislative term,” adding, he would hand in the resignation of the cabinet to Bahraini King Hamad bin Isa Al Khalifa “in order to take the necessary decision.”

Bahrainis went to the polling stations for runoff parliamentary elections amid a widespread boycott by opposition groups.

The runoff vote was held a week after the first-round vote determined only the fate of six of the 40-seat lower house of parliament. Voters decided about the remaining 34 seats on Saturday.

The Bahraini premier congratulated the elected lawmakers on “winning the people’s trust,” saying, Bahrain is on “the threshold of a new phase of national action.”

As many as 14 seats of the parliament were won by Shia candidates.

Bahrain’s main opposition party, the al-Wefaq National Islamic Society, issued a statement on the runoff parliamentary elections in the country, saying the turnout has been less than 30 percent.

The group also said the majority of the Bahraini people would continue their long struggle for justice and democracy until their legitimate demands are met.