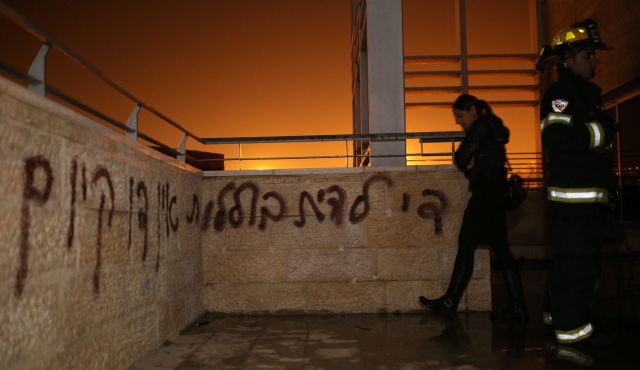 Netanyahu is turning Jerusalem into the new Tehran

The racist downpours that have fallen on Israel lately are only the first rains of a long winter of racism, one that will flood Israel for years to come.

No one doubts that Prime Minister Benjamin Netanyahu is a Jewish patriot with every fiber of his body. Jewish patriotism is instilled so deep within him that, while he’s never forgotten “what it means to be a Jew” (to borrow the phrase he famously coined) – he’s forgotten what it means to be “Israeli.” It’s possible that he’s never believed such a thing really exists.

A reminder: The first prime minister elected in Israel who tried to be “Israeli” never got to realize the Israeli dream. He was murdered in a square in the first Hebrew city by a Jewish, yarmulke-wearing assassin. He was murdered for “disgracing the Jewish tribe’s honor.” Remember that the current prime minister – the Jewish tribal patriot – led the chorus of incitement against him at that city square nearly 20 years ago.

It’s also worthwhile to remind those who have forgotten, or are trying to forget, that one of the major claims against Yitzhak Rabin is that he did not have “Jewish majority” support for his policies. Those inciters were furious that Rabin’s government relied, in democratic fashion, on a political bloc that included the Arab parties. Those inciters are now running the country – from the Prime Minister’s Office to the government ministries, and from the public sector to the spiritual leaders who continue teaching their students “The King’s Torah” [a book interpreting the halakhic view on the killing of non-Jews].

The monster that exists under the label “the Jewish state” – the original sin of failing to separate state and religion – has turned on its creators. The price of that sin is what we are hearing and seeing now. The “price tag” attackers, who for years have vandalized Arab churches and mosques, destroyed property and sprayed “Jewish” slogans and Stars of David on walls, are only soldiers acting in the spirt of the “Jewish” orders they hear from every podium in the Promised Land.

Currently, these “price tag” slogans are being given legal justification as they’re formulated into a bill. This constitutes turning the mob’s dirty epithets into the letter of the law. That is the brutal nature of the “Jewish nation-state” bill, which rejects a fifth of the Israeli population that are still labeled – at least in name – citizens with “equal rights.”

Netanyahu continues to flex his muscles when it comes to state and religion. Not only is he pushing the “Jewish nation-state bill,” he also considers it an “important influence on how Israel will appear in the future.” As he’s stated previously, he plans to personally ensure that the bill includes the clause that “the State of Israel was founded on the basis of the Torah and Jewish tradition.” He will also work to set the Gemara as “the basis for the Israeli legal system.”

In light of these remarks made by the prime minister and his followers, it seems that Israel is making large strides toward joining the rest of the Middle East, mired in religious messianism and tribal religious wars – like the days of old. Jerusalem is becoming more and more like Tehran, and Netanyahu is looking more and more like Recep Tayyip Erdogan’s doppelgänger.

Anyone who thinks this might stop here will quickly be proven wrong. The racist downpours that have fallen on Israel lately are only the first rains of a long winter of racism, one that will flood Israel for years to come. In the future, all those who didn’t lift a finger to stop this flood will be considered partners in the worse crimes that have yet to come.

This is the time to say, outright, that the legal price tag we are witnessing is like a malignant tumor of racism that will eventually destroy the very fabric of Israeli society. To paraphrase Henrich Heine, wherever Jews throw firebombs and burn Arabs’ homes and holy places, they will also, in the end, burn their cousins, too.

This article was written by Salman Masalha for the opinion page of Haaretz on NOV. 30, 2014.

The Iran Project is not responsible for the content of quoted article.