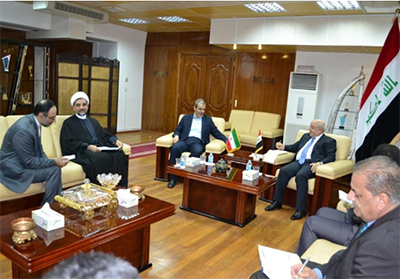 Tehran, Nov 30, IRNA – Iraq is to open a cultural center in the capital city of Tehran, the Iraqi Culture Minister announced in a meeting with Iranian officials in Baghdad on Sunday.

Iran’s Ambassador to Iraq Hassan Danaifar and the Cultural Attaché Gholamreza Abazari met with Iraqi Culture Minister Raundozi and emphasized the expansion of cultural ties between the two nations.

Hassan Danaifar, for his part, said that expanding cultural ties will be a great step towards deepening the friendship of the two neighboring countries. He also announced Iran’s readiness to develop ties in all levels.

Elsewhere Gholamreza Abazari noted that the trips of Iran and Iraq’s cultural delegations reveals the strength of their cultural ties.