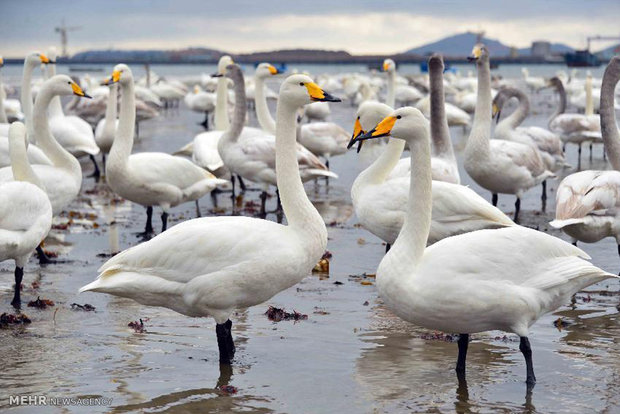 SURKHRUD, Nov. 30 (MNA) – Surkhrud in Mazandaran Province has been for years the destination for thousands of whooper and mute swans flying from Europe and Siberia.

The flooded paddy fields of Surkhrud in Mahmoud Abad County are especially beautiful in fall and winter, since these wetlands are home to migratory swans flying such long distances to take shelter in an area of 60 acres.

Just last year, about 5,000 mute and whooper swans migrated to this area. Considering the limited space and the large number of swans, natural food in this wetland was only adequate for a week, therefore environmental activists began to collect corn and distribute it among these beautiful albeit noisy birds. Arguments between Whooper families are common and noisy, with much wing flapping.

CEO of Migratory Birds Protection Agency in Surkhrud told Mehr News, “this agency is involved in collecting and providing food for these swans, and has contributed a lot in this respect last year.”

“These migratory swans are mostly of two types of Mute Swans and Whooper Swans flying over from various parts of Europe and Siberia,” he said, “nowhere in the world at this moment of the year witnesses such a huge number of swans taking shelter at one place.”

Mayor of Surkhrud referred to the unique wetland located in this area and asked for it to be globally registered.

“We hope to overcome the problems on the way of registering this wetland and will soon be witness to the development of tourism in this city,” he told Mehr News.