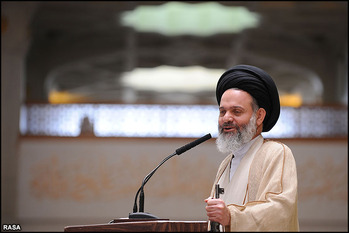 Qom Friday Prayer Leader: Iran is not against the American people

Ayatollah Bushehri stated that Iran is not against the American people, but is against their [government’s] bullying and demanding attitude and are opposed to those who have hypocritical attitudes to our serious demands.

His Eminence expressed satisfaction with the recently held “World Congress on Extremist and Takfiri Movements in the View of Islamic Scholars,” saying the conference was reminiscent of the activities accomplished by Ayatollah [Sayyed Hoseyn] Boroujerdi.

“Countering the plots of the Takfiri phenomenon was one of the aims of this conference. These terrorists have invaded the streets of Iraq and Syria instead of fighting Israel,” he stated.

The presence of many scholars at this conference announces that they are all united against Takfirism and shows the world that Takfiris are separate from Muslims due to their passion to kill their Muslim brothers.

Ayatollah Bushehri stated that the scholars present at the conference issued a fatwa (religious edict) stating that the Takfiris have gone astray from the original path of Islam and have sought to divert Muslims from the Islamic Awakening.

“We hope to establish a permanent secretariat for the Congress in order to dry up the Takfiri phenomenon, which is a festering wound [upon the body] of the Muslim world,” he said.

Westerners and Americans do not hesitate to support these Takfiri terrorist groups. The Supreme Leader of the Islamic Revolution (Ayatollah Sayyed Ali Khamenei) had previously stated that five separate times, thirty tons of weapons and equipment were given to IS terrorists [by their sponsors].

Referring to the attack on the house of the Bahraini Shi’ite leader, Shaykh Isa Qasim, by the oppressive Al Khalifah monarchy, Ayatollah Bushehri stated: “The [Bahraini] government recently held ceremonial elections that were boycotted by the people and scholars. In order to show their anger, the regime wickedly attacked the home of Shaykh Isa Qasim.”

“However, today all the scholars in Bahrain announced their solidarity with Shaykh Isa by suspending the holding of Friday prayers until they can pray behind their leader,” Ayatollah Bushehri added.

His Eminence stated that Ayatollah Khamenei announced that he is not opposed to the extension of the nuclear negotiations with the P5+1, but stated “if the talks fail, the one who will lose the most will be the Americans, not us.”

He said Ayatollah Khamenei also stated that the Islamic Republic of Iran does not need to win the trust of the US government with regard to the peaceful nature of its nuclear program.

Ayatollah Bushehri stated that Iran is not against the American people, but is against their [government’s] bullying and demanding attitude and are opposed to those who have hypocritical attitudes to our serious demands.