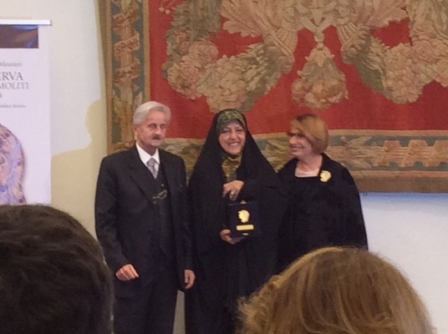 Tehran, Nov 29, IRNA – Iran’s Vice President and Head of the Department of Environment Masoumeh Ebtekar has won the Italian Minerva Award for her scientific achievements and successful career in political arena, it was reported on Saturday.

Minerva Award is a nongovernmental award established in 2009 in the name of Madame Anna Maria Mammoliti, Italian journalist and social activist after her death.

The Minerva Award has been presented to famous figures active in different social, economic, political and cultural fields, and the receivers have been mainly women. One of prizes awarded is called ‘Company of Knowledge,’ which seeks to recognize women who have achieved positive place for their professional competence.

Among the winners of the Minerva Award is notably Irina Bokova, the Director-General of UNESCO, who received the prize in 2010.