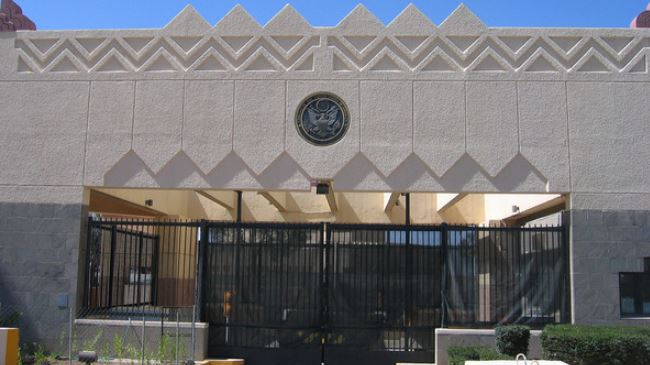 The file photo shows the US Embassy in the Yemeni capital, Sana’a.

Al-Qaeda militants in Yemen claim they have detonated two bombs outside the US Embassy in the capital, Sana’a, killing several guards, a US-based monitoring group says.

The SITE Intelligence Group quoted an al-Qaeda-linked Twitter account as saying on Saturday that the militants set off remote-controlled explosive devices at the northern gate of the US Embassy on Thursday night.

The militant group said the attack caused casualties among the ranks of the embassy security guards.

There has been, however, no comment from US officials about any attack at the diplomatic mission.

Earlier this month, al-Qaeda said it had tried in September to kill US Ambassador to Yemen, Matthew Tueller, with two bombs which were discovered and defused shortly before explosion.

The militant group said it had planted the devices outside the house of Yemeni President Abd Rabbuh Mansur Hadi who had received Tueller.

The US Embassy in Yemen has been the target of several attacks over the recent years, including one in 2008 which killed 18 people and injured 16 others. Al-Qaeda-linked militants claimed responsibility for the attack.