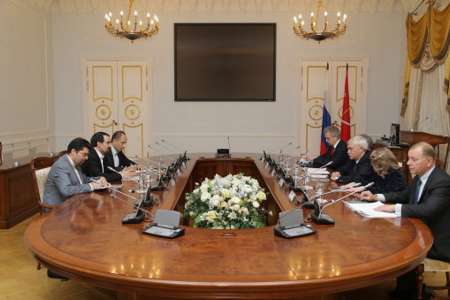 Efforts to be made for overall expansion of St Petersburg, Iran cooperation

Moscow, Nov 28, IRNA – Georgy Poltavchenko, Governor of St Petersburg has called for expansion of cooperation of this Russian region with Iran and said efforts will be made for this purpose.

In a meeting with Mehdi Sanaei, Iran’s Ambassador to Russia, Poltavchenko welcomed his presence in St Petersburg and announced readiness for facilitation of economic cooperation with the Iranian side.

He referred to the recent meeting between presidents of Iran and Russia on the sidelines of the summit meeting of the Shanghai Cooperation Organization and said the direction of bilateral cooperation was drawn in that meeting which is a good sign for both the countries.

He referred to the four fold increase in commercial transactions of this region and Iran and said scientific and cultural relations between St Petersburg and Iran have always been expanded and consolidation of cooperation in the field of tourism has been witnessed between the two countries in recent years.

He called for inclusion of the visit to St Petersburg and meetings with the officials of the region in the working plans of Iranian delegations visiting Russia, adding that establishment of Iran’s consulate general or mission in the region should be put on the agenda of officials of the two countries.

Poltavchenko further remarked that next year St Petersburg cultural day will be held in Isfahan and a delegation from the region headed by him will participate in the ceremony.

Meanwhile, Iran’s ambassador to Moscow said St Petersburg can lay an important role in strengthening Iran-Russia relations, adding that proper conditions have been prepared for tradesmen of the two countries which should be used for increasing commercial exchanges.

He pointed to the supply of agricultural products, foodstuff, livestock and aquatics as priorities of the Iranian companies and expressed hope that export of such commodities to Russia will bolster trade relations between the two countries.

Announcing that opening of Iran’s diplomatic mission in St Petersburg is on the agenda. Sanaei called for increase in the quota of Iranian students in universities of St Petersburg.