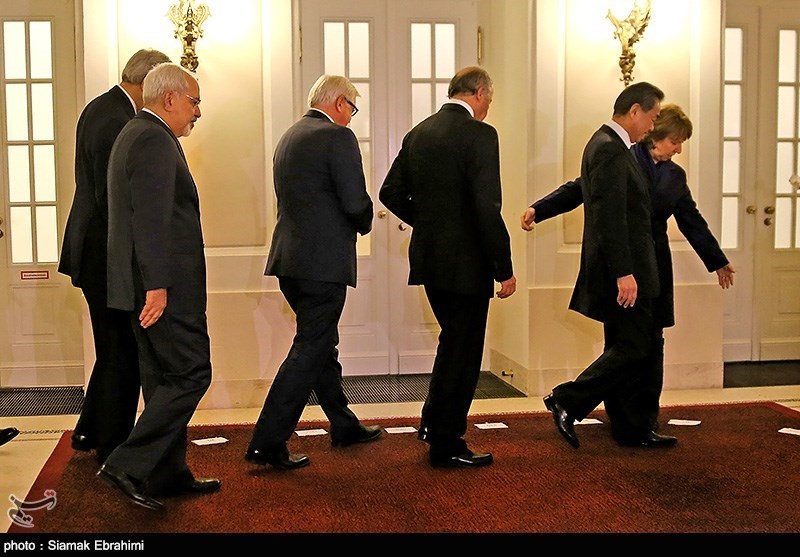 VIENNA — Just hours after nuclear talks between Iran and six world powers missed a Monday deadline, yielding instead a seven-month extension of negotiations, one sign indicated a combative return to business as usual.

In a speech to visiting Muslim clerics, Iran’s supreme religious leader,Ayatollah Ali Khamenei, devoted just two lines to the talks: “In the nuclear issue, America and colonial European countries got together and did their best to bring the Islamic Republic to its knees, but they could not do so – and they will not be able to do so.”

A triumphalist note, perhaps, about the 2-1/2 years of talks between Iran and the so-called P5+1 group (the US, Russia, China, Britain, France, and Germany), and one that may sound jarring to those in the West who worry that extending the talks makes them vulnerable to hard-liners on both sides who oppose a compromise deal.

But, analysts say, it is in fact part of an effort to broaden Iranian official and public support for continuing the talks and prepare Iranians for the result, whatever it may be.

Throughout the process, Mr. Khamenei has authorized every negotiating step, and in recent months – as the talks closed in on the Nov. 24 deadline – increasingly engaged in laying down Iran’s “red line” positions and gave personal support to Iran’s diplomats.

In the past week there have been further signs of Khamenei lining up support for a deal: an orchestrated nationwide push from Friday prayer leaders and even senior military officers – voices that have often been critical of negotiations – to support the talks and a possible compromise with foreign powers led by a long-standing arch-enemy, the United States.

“You can look at it both ways: They are preparing the ground either for a deal, or a situation where a deal doesn’t happen, because there are so many differences,” says Farideh Farhi, an Iran specialist at the University of Hawaii.

“It makes perfect sense for the Iranian political establishment to enter this process in a unified way so win or lose, failure or success, everyone can take credit…. They have decided they are all in this together,” says Ms. Farhi.

“It’s not a delaying tactic; their logic is close to that of the P5+1,” adds Farhi. As the deadline approached, and gaps remained, the Iranians could have walked away, but instead, like the P5+1 diplomats, “looked each other in the eye and decided, ‘no.’ ”

Foreign Minister Laurent Fabius of France – which has taken the toughest line against Iran of the P5+1– said in the final days talks had “accelerated” and that he detected from Iran “a will to find an agreement I hadn’t felt in the past.”

Iranian President Hassan Rouhani, immediately after announcement of the extension to June 30, 2015, sought to put a positive spin on the arrangement, which both keeps Iran’s nuclear program frozen and the bulk of crippling sanctions in place.

“Nobody doubts in the world today that Iran must have a nuclear activity, and that sanctions should be removed.… Our nation has been victorious this time,” Mr. Rouhani told Iranian state TV in Tehran.

“Our logic is that of negotiation and interaction with the world,” said Rouhani. A deal would come “sooner or later,” he said, and predicted improvement “from gray to twilight and bright of day.”

US officials took Rouhani’s words as a sign of Khamenei’s continued blessing for the talks.

Beyond the nuclear issue, some Iranian analysts suggest that more than a year of intense US-Iran diplomatic interaction – the first such contact since Iran’s 1979 Islamic revolution – may yield a shift away from Iran’s strident official anti-Americanism to a more functional relationship.

Nobody is using the word “friendship,” after 35 years of mutual hostility and overt and covert conflict between the US and Iran. But practical change may be afoot with a common enemy in Sunni militants of the Islamic State and a common desire for regional stability.

Resolving the nuclear issue “is an accelerator on every US-Iran issue,” says Amir Mohebian, a conservative analyst with close ties to power centers in Iran. “You can see the negotiations are not between P5+1, but the US and Iran. This can unfreeze the space between the US and Iran, but very gradually.”

President Barack Obama’s fourth and most recent letter to Khamenei, in which he addressed the nuclear talks and the spread of the Islamic State in Iraq and Syria, had a “good” tone and positive impact in Tehran, says Mr. Mohebian.

Speaking over the weekend, Mr. Obama hinted at a broader result if a nuclear accord can be reached.

Still, Khamenei has rarely wavered from tough anti-US rhetoric. In speeches he often lists historical grievances – from the CIA’s role in a 1953 coup in Iran to the Stuxnet computer virus aimed at disrupting Iran’s nuclear program – that he says mean the US can’t be trusted.

But Khamenei has also authorized direct contact with the US if he thought it served Iran’s interests, as in providing the US targeting and intelligence information on the Taliban in Afghanistan in 2001.

Khamenei could present a nuclear deal to Iranians this way, says Mohebian: “This is the result of your independence and resistance. Your enemy respects you. And – universally for all people – when someone respects you, they are not your enemy.”

A ‘defeat of Iranophobia’

Already, Iranian Foreign Minister Mohammad Javad Zarif, who led Iran’s team at the negotiations in Vienna, said the talks had resulted in a “defeat of Iranophobia” in the world, and a chipping a way of “compounded mistrust” between Iran, the US, and the West.

There was criticism of Rouhani on Tuesday in hard-line media and among conservatives in parliament, though the reformist Shargh daily said Iran’s diplomatic dialogue with the West and particularly the US was a “major change” that amounted to a “victory of realism, rationality, and pragmatism.”

The reformist Etemaad newspaper said the coordinated support for nuclear talks among all Friday prayer leaders – their messages are synchronized with the supreme leader’s office – was “unprecedented.”

While a nuclear deal might shift official Iranian attitudes toward the US, the faithful still chant “Death to America!” and “Death to Israel!” every week at Friday prayers. This week, those chants echoed in parliament in Tehran, too.

“Many people say this anti-Americanism is part of the identity of the revolution, so it is a very big change. How can [the revolution] survive, how can it reach agreement [on the nuclear issue] but also keep this identity?” says a veteran observer in Tehran who asked not to be named.

“Still Khamenei says, ‘We can’t trust America,’ ” notes the observer, ironically. “So let’s sit for hours and days and months and try like hell for a deal with these people we can’t trust.”