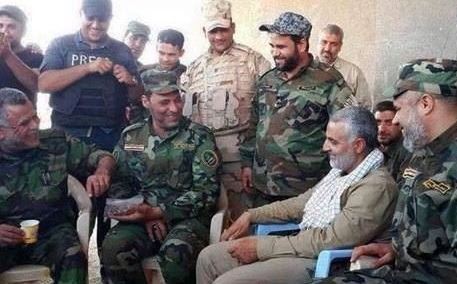 ERBIL, Kurdistan Region – A top Iraqi militia commander said that no Kurdish forces took part in the operation that pushed back Islamic State (IS) gunmen from the strategic city of Saadiya which had been seized by the jihadists militants since early summer.

Hadi Ameri, who is the head of the Shiite Badr militia, said Iranian army played a key role in liberating the two cities of Jalawla and Saadiya.

“Saadiya was liberated by the (Shiite) People’s Protection Force (HASHD) with heavy artillery and air support from the Iraqi army and national police force,” Ameri told Rudaw. “No Peshmarga force took part in the battle for Saadiya,” he added.

Rudaw has learned that the Qasem Soleimani, the Iranian veteran para-military commander, has helped the Peshmarga forces with military planning and attacks on ISIS positions in Saadiya and Jalawla. Sulaimani is head of the elite Quds brigade of Iran’s powerful Revolutionary Guards.

“We have to thank Iran for supporting us with so much in the two operations,” Ameri said.

He was critical of “the way the US-led coalition was directing the war on ISIS” and accused Washington of hypocrisy.

“The US is lying and mocking us unlike Iran which has helped us genuinely,” Ameri added.

He said that the Iraqi army and HASHD forces greatly supported Peshmerga forces in the battle for Jalawla, in which 20 Peshmarga forces were killed and more than 40 wounded. The operation began and ended on Sunday as ISIS gunmen completely withdrew from the city.

“We consider both cities as constitutionally disputed cities and hope that no one would even think about continuing the old regime’s policies in this region,” Mala Bakhtiar, a leading Peshmerga commander who also took part in the operations, told Rudaw.

“The arming of ordinary people by some Iraqi factions will not bring security and stability to this area and will not work in the long run,” he said.

Kurdistan’s Vice President Kosrat Rasoul told Rudaw earlier that both the Iraqi army and HASHD forces “will be leaving the city of Saadiya very soon.” But Ameri said they have agreed with the Peshmarga forces to jointly patrol the city.

“We have no plans to withdraw from Saadiya. No Kurdish or Peshmerga official has asked us to do so either, since we have an agreement with them to stay and patrol the city,” he added.