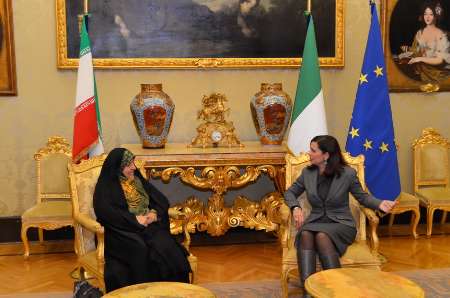 Italian parliament speaker made the remarks in a meeting with visiting Iranian head of Department of Environment Masoumeh Ebtekar.

In the meeting which was held in Italy parliament, she said Islam is the religion of kindness and moderation and extremism practiced by terrorist groups has no room in the Islamic ideology.

International community should consider Iran’s new and constructive developments with a positive outlook, she said.

She voiced her country’s readiness to broaden bilateral relations and cooperation in the fields of parliament, economy, culture and science.

Ebtekar, for her part outlined the results of her two days visit to Rome and expressed her views on major challenges to the environment in the world and how to deal with them.

Meanwhile, she highlighted the significant status of Iranian women and their success in various fields.

Ebtekar heading a delegation arrived in Rome to confer with the Italian officials on expansion of relations and signing a memorandum of understanding on environment protection.