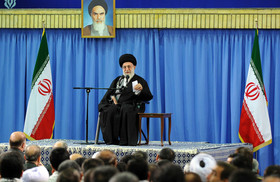 Iran’s Supreme Leader Ayatollah Ali Khamenei said on Thursday he was not against an extension of nuclear talks between the Islamic Republic and world powers.

Talks on Iran nuclear issue showed US not trustworthy: MP

A senior Iranian legislator has said that nuclear talks between the Islamic Republic and the six major world powers revealed that the United States is not a reliable country.

Iran’s head of the Judiciary has appreciated Iran’s negotiation team and the president as ‘supervising over the negotiations process.’

Entire Iran to stand up to excessive demands: Leader

Leader of the Islamic Revolution Ayatollah Seyyed Ali Khamenei says the entire Iranian nation will stand up to excessive demands as the Islamic Republic engages in nuclear negotiations with six world powers.

Iranian First Vice-President Eshaq Jahangiri, in a meeting with the visiting Azeri Deputy Prime Minister Ali Hassanov, called for the promotion of relations between the two countries in all spheres.

Plan to protect women against violence

A plan for the establishment of a center for protecting women against violence has been presented by the Presidential Office’s Department for Women and Family Affairs to the cabinet, said the head of the department.

The leader of the Islamic Revolution Ayatollah Seyed Ali Khamenei said the US will be the main loser if the nuclear talks between Iran and the six world powers fail.

Iran’s Oil Minister Bijan Namdar Zanganeh met with his Saudi counterpart Ali Al-Naimi in Vienna on Wednesday and announced after the meeting that Tehran’s oil market position was close to that of Riyadh.

Commercial deputy at the Islamic Republic of Iran Airlines (Iran Air) Mohammad Reza Khoshnevisan said certain European countries have been refusing to provide fuel to Iranian planes since three years ago. However, the aircraft of those countries such as Lufthansa and Alitalia can easily receive fuel in Iran.