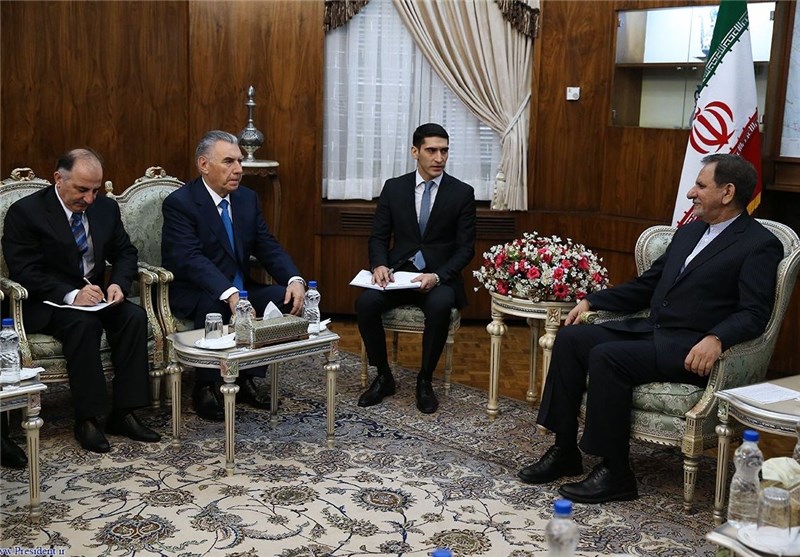 TEHRAN (Tasnim) – Iranian First Vice-President Eshaq Jahangiri, in a meeting with the visiting Azeri Deputy Prime Minister Ali Hassanov, called for the promotion of relations between the two countries in all spheres.

“Today, there is a serious determination at the highest administrative level in Iran and Azerbaijan to expand relations in all fields and the meetings between the two countries’ presidents prove the fact,” Jahangiri said in the meeting held in Tehran on Wednesday.

The Iranian official pointed to the historical and cultural affinities between the two nations and, said commonalities can pave the way for closer ties in diverse areas.

Jahangiri emphasized that there are great potential for the promotion of mutual cooperation between Tehran and Baku, particularly in the area of economy.

“Political relations between the two countries are at a good level but the economic ties and the volume of trade exchanges are not sufficient,” he noted.

The Azeri deputy prime minister, for his part, described ties between the two countries’ presidents as “friendly and close” and said the two sides should seize the opportunity to remove obstacles in the way of closer bilateral relations.

Hassanov arrived in Tehran on Monday for a three-day official visit. His trip to Tehran came at the invitation of Iranian Labor Minister Ali Rabiei.

During Iranian President Hassan Rouhani’s visit to the Republic of Azerbaijan earlier this month, the two countries signed 5 agreements and memorandums of understanding.

Back in April this year, Azeri President Ilham Aliyev paid a visit to Tehran to consult with senior Iranian officials on bilateral and regional issues and enhancement of mutual relations.

High-ranking officials from the two countries signed three memorandums of understanding and a cooperation agreement during his visit to Iran at the time.