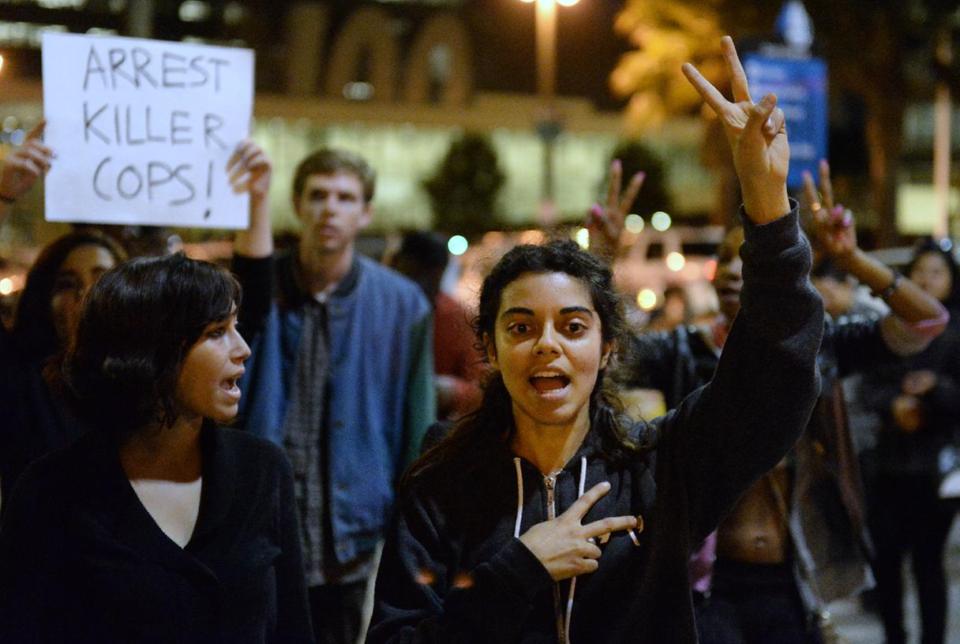 Washington (AFP) – Barack Obama’s election as the United States’ first black leader raised hopes that his presidency would serve as a platform for work to bridge the country’s still dangerous racial divides.

But, as his cautious response to clashes between protesters and police in the St Louis suburb of Ferguson shows, he still walks a fine line when the issue of race exacerbates a crisis.

Unrest was triggered when a grand jury declined to prosecute a white police officer who shot dead an unarmed black teenager who he said had attacked him — almost a test case for black distrust of the authorities versus a white fear of urban crime.

“We need to recognize that this is not just an issue for Ferguson, this is an issue for America,” Obama said, as he cautiously addressed a crisis that has triggered coast-to-coast protest marches.

He condemned the looting and arson that erupted after Monday’s decision, but said he understood those who believe law enforcement treats black suspects like 18-year-old Michael Brown harshly.

“Now, it may not be true everywhere, and it’s certainly not true for the vast majority of law enforcement officials, but that’s an impression that folks have and it’s not just made up,” he said.

“It’s rooted in realities that have existed in this country for a long time,” he added, with a nod to the legacy of slavery, segregation and economic exclusion that has shaped African American life.

Distrust of Obama among white voters could have cost him the presidency had it not been for the surge in support among America’s black and brown minorities that carried him to office.

Today, many of those supporters are disappointed at his cautious stance on race, and many have demanded that he make the trip to Ferguson to hear for himself about the problems there.

The White House has been careful not to rule out such a visit, and his black attorney general, Eric Holder, has made the journey, but he will be reluctant to plunge in while temperatures are high.

“It’s a very fine line, but he is managing this line very astutely,” said long-time civil rights activist Julian Bond, president emeritus of the National Association for the Advancement of Colored People.

Ferguson is the second major racially-charged issue to have challenged Obama’s balanced stance since his 2009 election.

In February 2012 another unarmed black teenager, 17-year-old Trayvon Martin, was shot dead by a neighborhood watch volunteer as he came back from buying candy at a store.

While the case against the gunman, George Zimmerman, was ongoing Obama was careful to steer clear of controversy, despite the outrage in the black community.

But when, in July 2013, Zimmerman was cleared of wrongdoing, he spoke out in sympathy for those who felt justice had not been served.

“Thirty-five years ago, I could have been Trayvon Martin,” he said, personally associating the lives of young black men with his own story — and finally inserting himself into the national debate.

“His detractors said that it was a local issue and that the president should not be injecting himself,” said Adolphus Pruitt, head of the NAACP’s branch in St Louis.

Pruitt said he would understand if Obama did not think the time was right for the drama of a presidential visit to Ferguson, but said Brown’s case showed the need for him to lead the debate.

“I don’t have a problem with the president being cautious as relates to injecting himself directly in a single incident,” he said.

“But I do not anticipate him being cautious as it relates to injecting himself in a need for change and dialogue nationwide on the issue.”

The St Louis prosecutor has decided not to prosecute Officer Danner Wilson for shooting Brown, after accepting his grand jury testimony that he acted in self-defense.

Legally, that would appear to conclude the matter in Missouri, but US federal authorities are still investigating whether St Louis authorities have broken civil rights law in policing black communities.

But three months after the shooting, there’s no sign that any action will be taken. If no case is opened, Obama and Holder may have to face another wave of anger, this time directed at them.