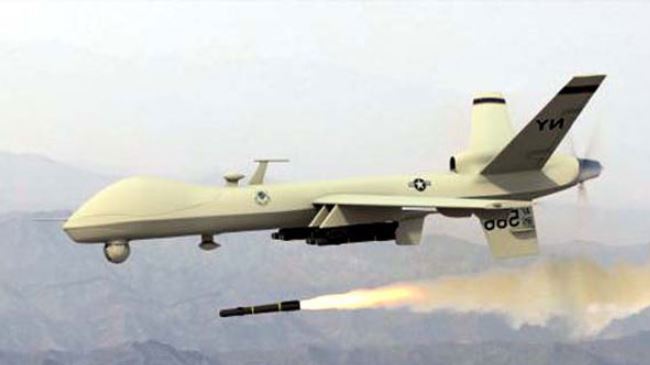 A US assassination drone (file photo)

TEHRAN (Tasnim) – At least seven people have been killed in two US assassination drone strikes in Pakistan’s northwestern tribal region and in neighboring Afghanistan.

According to Pakistani intelligence officials, an unmanned aircraft hit a compound in the town of Dattakhel in North Waziristan on Wednesday, killing at least four people.

At least two others have been injured in the attack in Waziristan along the Afghan border.

The death toll may rise as there are more possible dead bodies under the rubble.

Meanwhile, three Afghans lost their lives in a similar US drone strike in Afghanistan’s Laghman Province.

The US military carries out targeted killings through drone strikes in several Muslim nations such as Yemen, Pakistan, Afghanistan and Somalia.

Pakistan has borne the brunt of the notorious attacks, with large numbers of its citizens being killed.

The airstrikes have angered the Pakistani people and officials. Islamabad has condemned the attacks as a violation of its sovereignty, but the raids continue unabated, Press TV reported.

Washington claims the targets of the drone attacks are militants, but local officials and witnesses maintain that civilians have been the main victims of the attacks over the past few years.

The United Nations and several human rights organizations have identified the US as the world’s number one user of “targeted killings,” largely due to its drone attacks in Pakistan and Afghanistan.