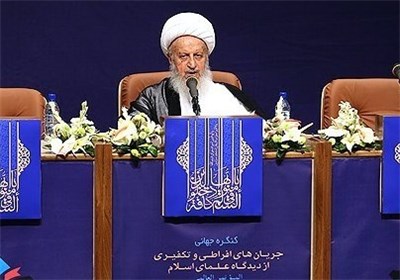 Pointing to the recent international conference on threats posed by extremist and Takfiri groups which was held in the Iranian city of Qom, Ayatollah Makarem Shirazi said holding such events undermines hostilities and boosts Muslims’ unity against the illwishers such as US and the Zionist regime of Israel.

The senior Iranian cleric also described the ISIL terrorist group as a “political, military and ideological sedition,” and said the Muslim clerics taking part in the international conference emphasized that the ideological roots of the terrorist movement should be traced and eradicated.

Hundreds of Muslim scholars from various sects, including Shiites and Sunnis, and from 83 countries gathered in the holy city of Qom on Sunday to take part in the international conference on threats of Takfirism.

The conference was aimed at countering threats imposed by Takfiri groups and boosting for peace, friendship, brotherhood and interaction among different Islamic sects.