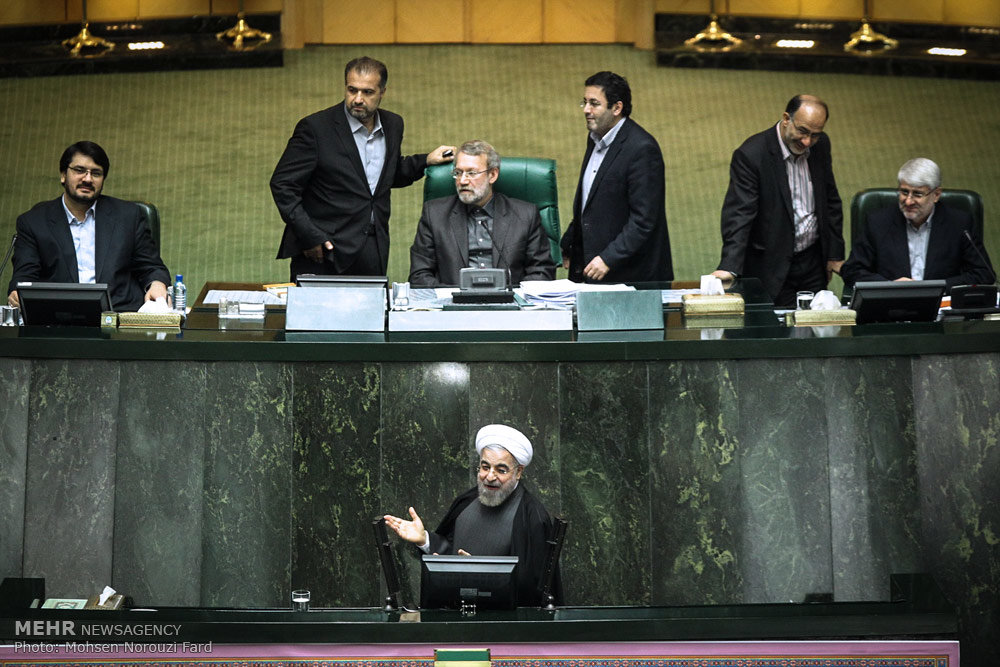 This morning President Hassan Rouhani and a number of his cabinet members including Mohammad Farhadi, his fifth nominee for minister of science, research and technology, attended an open session of the Iranian Parliament (Majlis) for confidence vote. The session was chaired by Majlis Speaker Ali Larijani.

“Any change in boundaries is only possible with Majlis approval,” he continued, “many issues mentioned in the Constitution including treaties, protocols, or even giving loans or grants, are all within the responsibilities of Majlis.”

“Our universities must be a center for knowledge and diplomacy and not a platform for different political factions; Mr. Farhadi is of the same opinion and believes that universities should provide a peaceful, scientific atmosphere and take our society’s problems into consideration,” he said.

Elsewhere in his speech, President Rouhani referred to Iran’s non-partisan democracy and said, “of course, with a partisan democracy, things could have been much easier political-wise, but the Constitution has decided on this kind of democracy. It has its advantages as well as its drawbacks, but this does not mean that we are not thinking of better ways for improvement.”

“Where the views of legal entities are in line with public opinion, there the democracy works smoothly,” Rouhani continued, “but of course the public opinion does not remain static in various elections, and keeps changing with years.”

President Rouhani compared the public opinion to a flowing stream that is constantly changing and said, “however, the election that showed us the public opinion and must now be our criterion for decision-making today was on June 14.”

After Iran’s Parliament voted former minister Reza Faraji-Dana out of office in an impeachment session in August, and two of President Rouhani’s candidates for the Ministry for Science, Research and Technology were given a no-confidence vote, in a letter to Larijani Rouhani, Rouhani had introduced Mohammad Farhadi for this position.

Mohammad Farhadi is a reformist diplomat and an otolaryngologist graduate from Mashahad University. He was the minster of higher education in the fourth government and the minister of health in the seventh government.