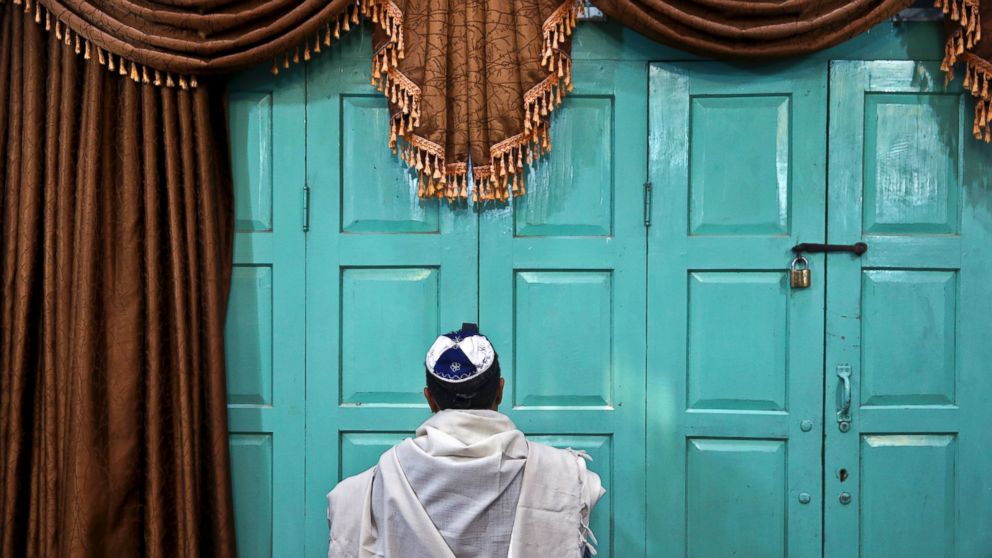 In this Thursday, Nov. 20, 2014 photo, an Iranian Jewish man prays at the Molla Agha Baba Synagogue, in the city of Yazd 420 miles (676 kilometers) south of capital Tehran, Iran. More than a thousand people trekked across Iran this past week to visit a shrine in this ancient Persian city, a pilgrimages like many others in the Islamic Republic until you notice men there wearing yarmulkes. (AP Photo/Ebrahim Noroozi)

YAZD, Iran (AP) — More than a thousand people trekked across Iran this past week to visit a shrine in this ancient Persian city, a pilgrimage like many others in the Islamic Republic – until you notice men there wearing yarmulkes.

Iran, a home for Jews for more than 3,000 years, has the Middle East’s largest Jewish population outside of Israel, a perennial foe of the country. But while Iran’s Jews in recent years had their faith continually criticized by the country’s previous governments, they’ve found new acceptance under moderate President Hassan Rouhani.

“The government has listened to our grievances and requests. That we are being consulted is an important step forward,” said Homayoun Samiah, leader of the Tehran Jewish Association. “Under former President Mahmoud Ahmadinejad, nobody was listening to us. Our requests fell on deaf ears.”

Most of Iran’s 77 million people are Shiite Muslims and its ruling establishment is led by hard-line clerics who preach a strict version of Islam. Many Jews fled the country after the 1979 Islamic Revolution. Jews linked to Israel afterward were targeted. Today, estimates suggest some 20,000 Jews remain in the country.

Tensions grew under Ahmadinejad, who repeatedly called the Holocaust “a myth” and even sponsored an international conference in 2006 to debate whether the World War II genocide of Jews took place. Vice President Mohammad Reza Rahimi once accused Jews as whole of being drug dealers.

But since Rouhani took office last year, Jews say they have been heartened by the support they’ve received. His government agreed to allow Jewish schools to be closed on Saturdays to mark Shabbat, the day of rest. Rouhani also allocated the equivalent of $400,000 to a Jewish charity hospital in Tehran and invited the country’s only Jewish lawmaker to accompany him to the United Nations General Assembly in New York last year.

“We were fearful in the `80s. We were feeling the pressure. Now, we are not concerned anymore. We feel secure and enjoy freedoms,” said Mahvash Kohan, a female Jewish pilgrim who came to Yazd from Shiraz. “In the past, Israel and others were providing incentives such as housing that lured some Jews. Now, it’s not like that. And Iranian Jews have better living and working conditions in Iran. So, no one is willing to leave now.”

Still, human rights groups say Jews and other minorities in Iran face discrimination. Last year, officials in Iran’s presidency denied that Rouhani had a Twitter account after a tweet that appeared to be from the leader offered a greeting for Rosh Hashana, the Jewish New Year. Iranian state television also has aired anti-Semitic programming.

Those taking part in the recent Yazd pilgrimage to the tomb of a famed Jewish scholar, however, praised the Iranian government’s new outreach.

“We’ve gathered here to pray and celebrate our Jewishness,” Kohan said. “We are proud that we freely practice our religion.”