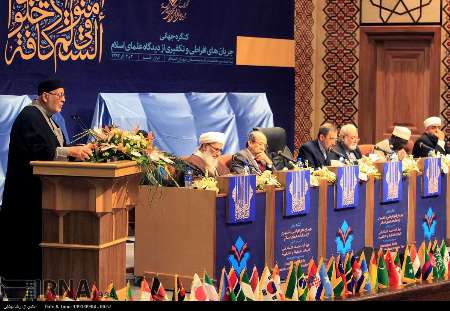 Qom, Nov 25, IRNA – Outstanding figures from the world of Islam in the closing session of the World Congress on Extremist and Takfiri Movements in the Islamic Scholars’ View’ underlined the need for all countries to reject all extremist, violent and Takfiri groups.

The personalities also lauded the important role of Muslim ulema and elite in preventing discord and bringing about unity among Muslims, calling for adoption of concrete measures to uproot this menace from the world of Islam.

Seyed Sadeq Othmani, a scientific figure from Brazil, said enemies have drawn up lines to deal blows on the Muslim world through terrosim with Takfiri groups playing the main part in this regard.

‘They have targeted our religious faith again and created a group of people with similar religious and lingual background to use our religion against us.’

The Brazilian personality said the tradition of the prophet and his infallible household are totally against the words and deeds of the extremist groups and the group has entered Muslim lands with a new ideology to destroy genuine Islam.

Sheikh Hasun, an Alim from Syria, asked why Ulema do not enlighten people well so that Takfiris cannot mislead them with their wrong attitudes.

‘Should we continue with our past method, we will continue to be at odds with one another,’ he added.

He went on to say that if Shiite and Sunni ulema are in disagreement on some matters, they should stick to God and His Messenger.

He said Muslim ulema have the duty to forge unity and avoid dispersion among Muslims.