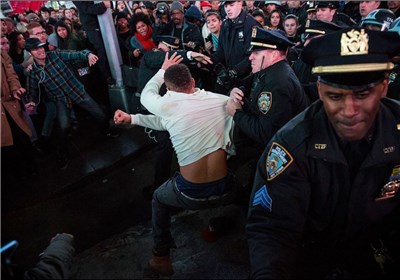 More US troops deployed in Ferguson amid ongoing unrest

TEHRAN (Tasnim) – More than 2,000 National Guard troops spread out across the St. Louis area on Tuesday to prevent another night of unrest after a grand jury declined to indict a white policeman in the fatal shooting of an unarmed black teenager.

As darkness fell, in a scene that appeared significantly more controlled than Monday night, dozens of protesters chanted “No justice, no peace!” near the police station in suburban Ferguson before officers swiftly moved in to detain at least two people who defied orders to clear the road.

About a mile away, camouflaged Guardsmen toting assault rifles quietly surrounded businesses damaged on Monday by protesters angry over the decision not to indict officer Darren Wilson in the August shooting of 18-year-old Michael Brown.

The killing in Ferguson, a predominantly black city with a white-dominated power structure, underscored the occasionally tense nature of US race relations and sometimes strained ties between African-American communities and the police, Reuters reported.

Racially charged protests that erupted after Monday’s grand jury decision were more intense than unrest that broke out in the immediate aftermath of the shooting itself, but still much smaller than those that followed the acquittal of police officers in the beating of black motorist Rodney King in Los Angeles two decades ago.

“Last night the rioters did some things to our community we all couldn’t have woke up this morning imagining,” Captain Ron Johnson of Missouri Highway Patrol told reporters.

About a dozen buildings, including a pizza shop and a beauty parlor, burned overnight as protesters took to the streets in anger. Police said protesters fired guns at them, set patrol cars on fire and hurled bricks into their lines. Police, who had been preparing for months but admitted they were overtaken by the violent events that unfolded, fired tear gas and flash-bang canisters at demonstrators. Sixty-one people were arrested.

Protests also erupted in major cities from Los Angeles to Washington on Tuesday. In New York, police used pepper spray to control the crowd after protesters tried to block the Lincoln Tunnel and marched to Times Square.