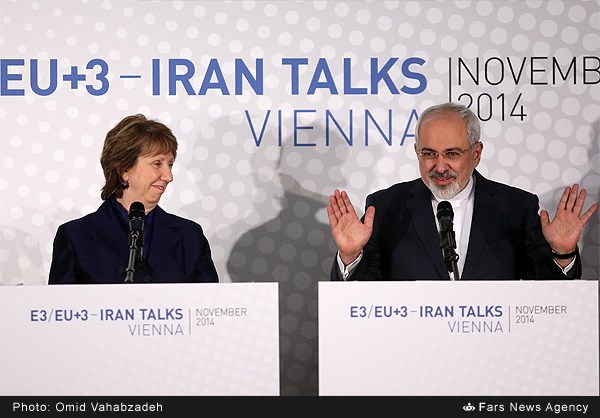 Since we agreed to the Joint Plan of Action one year ago in Geneva, we, together with the Foreign Ministers and Political Directors of the E3+3 (China, France, Germany, Russia, the United Kingdom and the United States), have been engaged in intensive diplomatic negotiations aimed at reaching a comprehensive solution.

We once again express our appreciation to the Austrian Government for their most generous support in hosting these negotiations in Vienna.

Based on the strong commitment by all sides to reach a mutually-agreed long-term comprehensive solution, we have held ten rounds of negotiations and numerous meetings during the past months.

Some ideas have been developed, but given the technical nature of this effort and the decisions needed, more work is required to assess and finalize them as appropriate.

We, together with the Foreign Ministers of the E3+3, have therefore agreed to continue our diplomatic efforts. We have decided to extend the measures of the Joint Plan of Action to allow for further negotiations until June 30th.

We intend to build on the current momentum in order to complete these negotiations within the shortest possible time, up to four months, and if necessary to use the remaining time until the end of June to finalize any possible remaining technical and drafting work.

Iran and the E3/EU+3 reaffirm that they will continue to implement all their commitments described in the Joint Plan of Action in an efficient and timely manner.

The IAEA will be asked to continue monitoring the voluntary measures under the Joint Plan of Action.

The next meeting to continue our work will happen in December.

Iranian Foreign Minister Mohammad Javad Zarif also said Iran has the right to have an enrichment program under any deal with the P5+1 group.

“I do not believe that anybody any longer questions Iran’s enrichment program. We believe that right of Iran to the peaceful nuclear energy, including uranium enrichment, is enshrined in the NPT (Non-Proliferation Treaty), which does not require anybody’s recognition. The right is there. What is important is for Iran to be able to implement that right, to exercise that right without the threat of sanctions and pressure which are, in our view, illegal,” Zarif stated.

“I believe everybody has worked hard particularly over the last week… in order to overcome rather important differences” between Iran and P5+1, Zarif said, adding, that the discussions centered on two objectives — ensuring that Iran’s nuclear program remains peaceful and sanctions imposed on Iran are lifted.

The Iranian foreign minister further touched upon the issue of illegal sanctions imposed on Iran, saying, “The sanctions are not only misguided… but are totally ineffective.”

“Sanctions do not resolve the problem,” Zarif stated. “Only, and I stress, only a negotiated resolution” can lead to the termination of standoff between Iran and the West over Tehran’s nuclear energy program.

“We believe that a negotiated resolution is within reach,” he asserted.

A political agreement between Iran and the six countries is within reach with a positive-sum rather than zero-sum perspective, said the Iranian foreign minister, adding that four months are enough to resolve outstanding issues in the nuclear negotiations.

The top diplomat further said that the rest of a now extended seven-month deadline would be used to put complicated technical issues into a final agreement.

Iran’s President Hassan Rouhani also the Iranian nation will  never bow to sanctions and pressures and will keep its nuclear facilities under any agreement.

“Today, the opposite negotiating sides have reached the conclusion that pressure and sanctions on Iran will not bear fruit,” Rouhani said.

He added that the Islamic Republic would never give up its nuclear rights, saying that the country’s nuclear facilities would certainly remain operational and Iran would never stop its centrifuges.

He noted that Iran pursues two main objectives in its talks with the P5+1 group, which include keeping its nuclear technology and lifting sanctions on Tehran.

The Iranian president also pointed out that the Iranian nation will be the final winner in the negotiations with the P5+1 countries over Tehran’s nuclear program.

Rouhani emphasized that the path of nuclear negotiations would lead to a final agreement, noting that all the sides in the nuclear talks had consensus on the extension of the nuclear talks as an effort to reach a final goal.

“Iran’s logic is one of negotiations and dialog; and nuclear talks will be continued with seriousness until a final agreement is struck,” he said.

Stressing that the latest round of nuclear talks in Vienna was positive, Rouhani added that although the negotiating sides failed to reach a final agreement, they managed to take steps forward because the conditions now are “completely different from [what they were] three months and six months ago, logics have come closer together and may of gaps have been filled.”

Iran and the P5+1 group of world powers could reach a “general agreement” on the Islamic Republic’s nuclear energy program in a matter of days if there is enough political will, a top Iranian nuclear negotiator said.

Iranian Deputy Foreign Minister for Legal and International Affairs Abbas Araqchi described the latest round of the nuclear talks between Iran and the P5+1 as “good” and expressed hope that Tehran and its negotiating partners could finalize a permanent deal if they continue their discussions.

“A political agreement or, in other words, a general deal could be reached within a few days if the necessary political will is there,” Araqchi said.
Araqchi said that things will continue based on the interim agreement, adding that Iran will receive USD 700 million of its frozen assets each month until next July.

The Iranian nuclear negotiator further hailed the progress made in the recent Vienna talks and said Iran and the other six states would resume their negotiations in a couple of weeks.