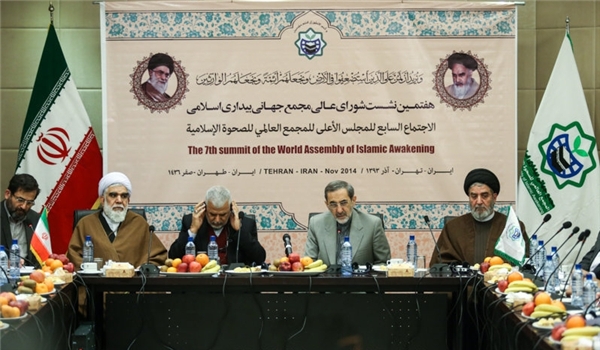 “The failure of global Zionism and the world arrogance in confronting the Islamic resistance face-to-face in Palestine and Lebanon has made them organize deviated streams in the form of Takfiri groups and fool a number of young Muslims to deviate the public opinion from the Palestinian issue and nullify the great achievements of the Islamic Awakening,” a statement issued at the end of the meeting said on Tuesday.

“The most important goal pursued by the world arrogance in creating Takfiri and extremist groups is that they want to present a harsh face of Islam and spread Islamophobia in the world in addition to deviating the public opinion from the Palestinian issue,” it added.

The statement also warned of the enemies’ plots to destroy the infrastructures of Islamic countries, specially Iraq, Syria, Yemen and Libya, with the help of Takfiri and terrorist groups.

In relevant remarks yesterday, Supreme Leader of the Islamic Revolution Ayatollah Seyed Ali Khamenei described the ISIL terrorist group as just a branch of the Takfiri stream which had troubled the region, and said ISIL was serving the US and Israel’s interests.

Addressing the political and religious figures participating in the ‘International Congress on Takfiri Streams in the Eyes of the Islamic Ulema’ in Tehran on Tuesday, Ayatollah Khamenei described the Takfiri stream as a problem imposed by the arrogant powers on the region in line with the US and Israel’s interests, and said the Takfiri stream should be considered as a phenomenon beyond the ISIL as the terrorist group is only a branch of the Takfiri stream.

“The Takfiri stream and the governments which support it completely move in line with the goals of the arrogant powers, meaning the US, the hegemonic European governments and the Zionist regime, and are practically at their service under an Islamic disguise,” he added.

Ayatollah Khamenei said diverting the Islamic Awakening was one of the goals pursued by the arrogant powers by supporting the Takfiri streams, and said, “The forefront of Muslims’ struggle in the region was focused on the occupied Palestine but the Takfiri stream changed this frontline and moved it into the streets and cities of Iraq, Syria, Pakistan and Libya and this is one of the Takfiri stream’s crimes which cannot be forgotten.”

He underlined that another instance for showing that the Takfiri stream was serving the US, Britain and the Zionist regime was that its supporters didn’t even show a minimum opposition to the Zionist regime and even collaborated with the regime in fighting the Muslims.

The Supreme Leader described destruction of the Muslim states’ infrastructures as another instance of the Takfiri stream’s services to the enemies of Islam, and said the stream also took the world attention off the 51-day Israeli war on the Gaza Strip, leaving the Palestinian resistance groups and people alone in their defense against the Zionists’ aggression.

He stressed that the so-called US-led anti-ISIL coalition was nothing but a lie, and said the US airdrops of military equipment and weapons for the ISIL displayed much of the truth.

He also underscored the Muslim Ulema’s responsibilities in the current situation, and said they should form a scientific, logical and pervasive campaign to uproot the Takfiri stream.