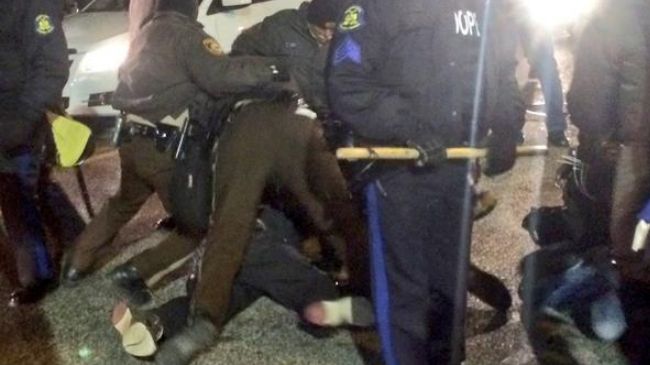 Amid protests, Russia, China urge US to stop lecturing about human rights

New violent protests triggered by a grand jury decision not to indict a police officer who killed a black teenager in Ferguson have prompted Russia and China to criticize the US for human rights issues and racial discrimination in the country.

Russian Foreign Ministry’s human rights envoy Konstantin Dolgov said on Tuesday the protests in Ferguson and other US cities showed serious challenges to the American society and its stability.

“Racial discrimination, racial and ethnic tensions are major challenges to the American democracy, to stability and integrity of the American society,” the Russian envoy said.

“We may only hope that US authorities seriously deal with those issues and other serious challenges in the human rights field in their own country and stop what they have been doing all along recently — playing an aggressive mentor lecturing other countries about how to meet human rights standards,” he added.

When asked about the violence over the case in the US, Chinese Foreign Ministry spokeswoman Hua Chunying said the case is an internal US affair but no country is perfect regarding human rights.

“We can learn from each other in this area,” she said.

A number of US cities have been the scene of violent demonstrations by people who are angry about the grand jury decision.

On Monday, St. Louis County prosecutor Robert McCulloch announced that white police officer Darren Wilson would not be indicted and that he would not even face charges for killing 18-year-old African-American Michael Brown in August.

More clashes have broken out between police and protesters in the city of Ferguson.

The governor of Missouri has called for the deployment of more National Guard troops to Ferguson.

The riots on Monday caused massive damage in St. Louis County despite a plea for calm from President Barack Obama.

The Saint Louis police chief said at least 18 people were injured and more than 80 people were arrested.

Meanwhile, UN Secretary General Ban Ki-moon called on Americans “to refrain from any violence” and “turn this difficult time into a positive moment for change,” according to UN spokesman Stephane Dujarric.