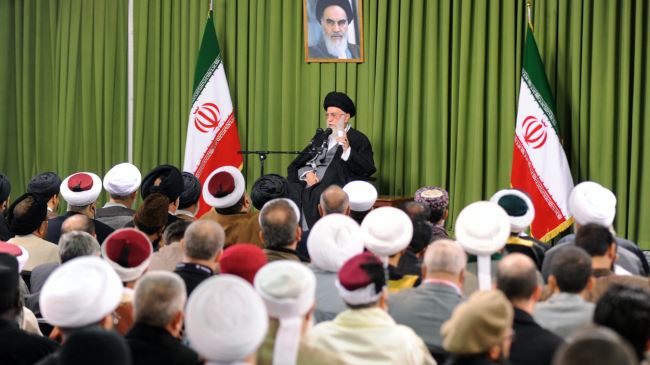 Leader of the Islamic Revolution Ayatollah Seyyed Ali Khamenei addresses the participants in an international conference on Takfiri terrorism in Tehran, November 25, 2014.

Leader of the Islamic Revolution Ayatollah Seyyed Ali Khamenei says the US and its European allies joined hands to bring the Iranian nation to its knees over the nuclear issue, but failed to do so.

Ayatollah Khamenei made the statements in a Tuesday meeting with participants in the World Congress on Extremist and Takfiri Movements in the Islamic Scholars’ View, held in the Iranian holy city of Qom on November 23-24.

“In the nuclear issue, the United States and colonial European countries got together and did their utmost to bring the Islamic Republic to its knees, but they failed, and will continue to fail,” Ayatollah Khamenei noted.

Iran and the P5+1 states – Russia, China, Britain, France, the US and Germany – wrapped up a week of closed-door nuclear negotiations in Vienna, Austria, on Monday.

The two sides decided to extend their discussions for seven more months in the search for a comprehensive agreement that would end a 12-year dispute on Iran’s peaceful nuclear work.

The Leader further referred to the violence by Takfiri ISIL extremists operating in the Middle East, stressing that such a Takfiri current serves the objectives of the hegemonic powers.

Ayatollah Khamenei said the aim of the so-called coalition, led by the United States to fight the ISIL is a “mere lie,” adding that Washington actually “seeks to keep this scourge alive, which of course it won’t be able to.”

“We are not entangled in religious divisions, and we will provide Hamas and Islamic Jihad in Palestine with the same assistance we offered to Shia Hezbollah in Lebanon,” the Leader noted.

Ayatollah Khamenei also called on Muslim scholars to help uproot the Takfiri current, which has diverted the Islamic world’s attention from the Israeli regime’s atrocities against the holy al-Aqsa Mosque in East Jerusalem al-Quds.