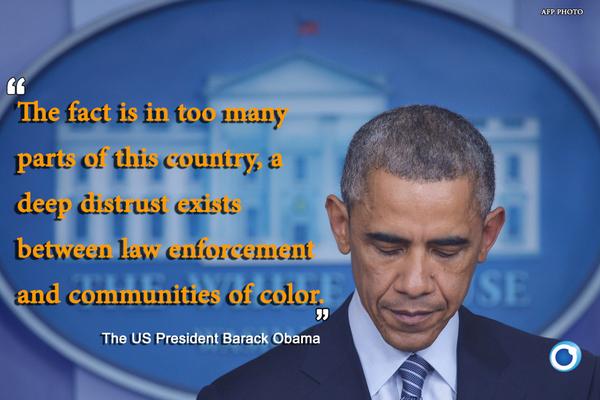 Obama admits racial discrimination in US amid Ferguson protests

President Barack Obama has acknowledged that the United States is suffering from racial discrimination amid protests over a jury decision not to indict an officer who killed an unarmed black American.

“The fact is, in too many parts of this country, a deep distrust exists between law enforcement and communities of color. Some of this is the result of the legacy of racial discrimination in this country,” Obama said on Monday night.

There are still “problems” related to racial discrimination and “communities of color aren’t just making these problems up,” he added.

Angry protesters took to the streets across the United States after a jury decided not to indict police officer Darren Wilson who shot dead unarmed black teenager Michael Brown in August.

“There are issues in which the law too often feels it is being applied in discriminatory fashion,” the US president said.

President Obama said that these protests are “an understandable reaction,” noting that he joined “Michael’s parents in asking anyone who protests this decision to do so peacefully.”

He also asked police to show “restraint in managing peaceful protests” occurring across the country and police “need to work with the community, not against the community.”