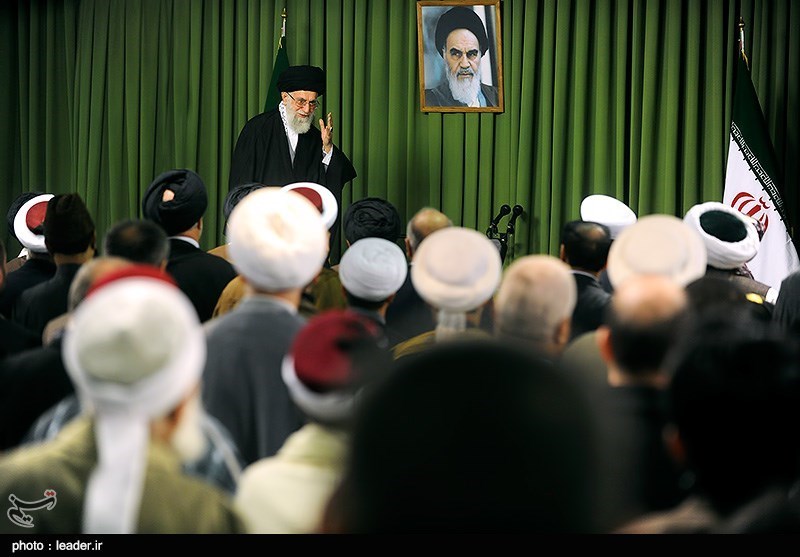 Iran’s Leader, Ayatollah Ali Khamenei referred to Tehran’s nuclear program and said, “the US and European hegemonic powers gathered together to try and bring the Islamic Republic to its knees, but they were not and will not be able to.”

“The Takfiri movement is completely in line with objectives of imperialism,” he maintained, “it was able to divert the Islamic Awakening movement, and then turned, what was originally a movement against the US and tyranny, into a conflict among Muslims.”

The Leader noted that both Iranian government and people are against the Zionist regime and said, “we are not entangled within religious or sectarian differences; the same aid and support we provided for the Shia Hezbollah in Lebanon, was also provided for Hamas and Jihad in Palestine, and we will continue doing so.”

“We have been informed that the US transport aircrafts had dropped ammunition for the ISIL at their occupied regions in Iraq, and they have done so five times,” asserted the Leader, implicitly refusing US claims of dropping the ammunition on mistake; “but then they hypocritically formed a coalition against ISIL which is a mere lie. The US wants to fuel the conflict, but of course they will not be able to.”

The Leader noted that Iran has been supporting Palestinian people in Gaza and other regions and reiterated that “the West Bank, too, like Gaza, must be armed and ready to defend itself should the need arise.”

The Leader also lamented the fact that the Islamic world had to turn its attention to conflicts created by the western hegemony -the Takfiri movement- instead of taking heed of Israel and what has befallen Al-Aqsa Mosque.

“A scientific and comprehensive cause must be developed to eradicate the Takfiri Movement,” said the Leader, “the scholars have a duty to save the youth deceived and influenced by ISIL. On Judgment Day, God will question the scholars on what they did in regard to this issue.”