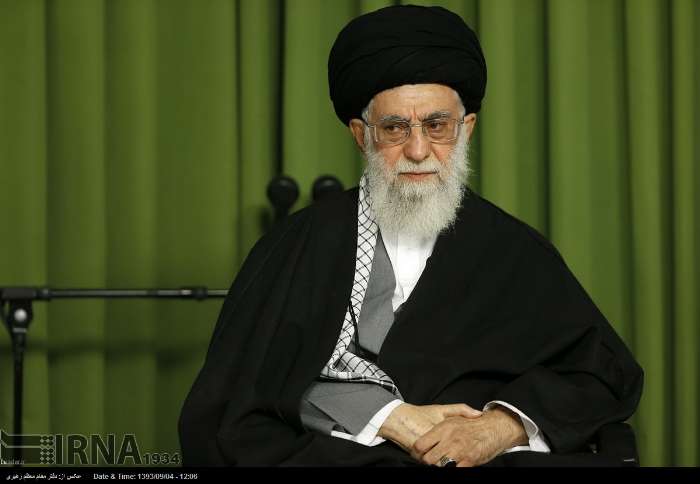 TEHRAN, Iran (AP) — Iran’s supreme leader on Tuesday gave his indirect approval for a continuation of talks over its disputed nuclear program, criticizing world powers who many frustrated Iranians believe could have worked harder to reach a deal with the country.

The remarks were the first by Ayatollah Ali Khamenei, who has final say on all state matters, since Iran and the major powers agreed Monday to decide by March 1 about what agreements must be reached on what schedule. A final deal is meant to follow four months later.

“On the nuclear issue, the United States and European colonialist countries gathered and applied their entire efforts to bring the Islamic Republic to its knees but they could not and they will not,” Ayatollah Ali Khamenei said, speaking to a group of clerics, according to his website. His reference to the future signals indirect approval of the talks.

In a nationwide broadcast on Monday, Iranian President Hassan Rouhani said Iran “has achieved a significant victory” and that “negotiations will lead to a deal, sooner or later.” He also said many obstacles in the talks “have been eliminated.”

Mojtaba Fathi, a Tehran-based analyst, believed the extension of the talks means that current international sanctions “will not increase against Iran and a reduction of the sanctions is possible while it has its own nuclear program on the ground. This has added to hopes for solving the case.”

Iranian lawmakers on Tuesday showed a mix of cautious optimism and defiance.

Vice-chairman of parliament, Mohammad Hassan Aboutorabifard, said the U.S. is not trustworthy since Washington “sacrifices” its national interests for Israel, but he still voiced support for further nuclear talks. Parliamentarians in attendance responded to his remarks by chanting, “Down with America.”

Lawmaker Mansour Haghighatpour, a member of the parliamentary committee on national security and foreign policy, told The Associated Press that the extension of the talks proves that “Iran does not give in its long-term interests.”

On Tehran’s streets, many said they had expected a deal on Monday, but that they remain patient in hopes for a future agreement.

“They should reach a deal,” taxi driver Mohammad Sayari said. “I was ready to take to the streets alongside other people to celebrate the announcement of a deal, which could mean better opportunities for me to earn more for my family.”

Hasti Ahmadi, a student in Azad Art University, said she did not expect any deal.

“The West is against us for any reasons,” she said. “They cannot tolerate Iran’s progress. They will raise another excuse after seven months to give up on a deal.”

The United States, Britain, France, Russia, China and Germany, have engaged in intensive negotiations over Iran’s nuclear program. Tehran has denied its nuclear research has any sort of military dimension, saying it is focused on peaceful uses like power generation and medical treatments.

Construction technician Nasrollah Savoji said: “Both my wife and I were shocked when we learned there was no deal. It means more months of low-profile business. A deal could inject hopes among the people, lead them to think about buying, renovating and constructing their homes.”

Coffee shop manager Masoud Dehghani said he is still hopeful a deal can be reached.

“Our leaders are very integrated and determined,” he said.