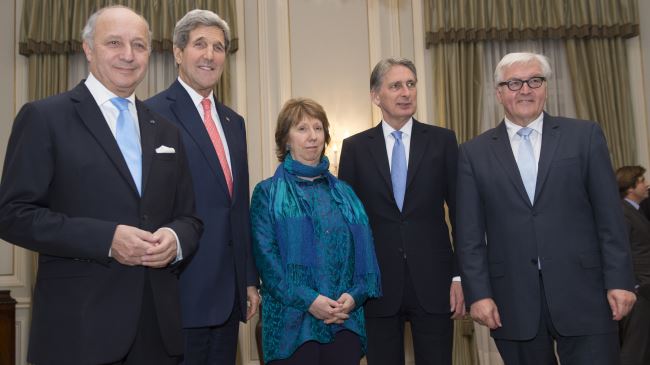 Foreign ministers from countries involved in the talks on Iran’s nuclear program have been holding meetings to pave the way for the negotiations to culminate in a successful ending.

On Sunday, last-ditch nuclear talks between officials from Iran and the members of the P5+1 group were held in the Austrian capital, Vienna, ahead of Monday’s deadline for a comprehensive agreement.

Iranian Foreign Minister Mohammad Javad Zarif held bilateral talks with US Secretary of State John Kerry. According to reports, the two sides discussed the possible extension of the ongoing nuclear negotiations among other issues.

“Our focus remains on taking steps forward toward an agreement, but it is only natural that just over 24 hours from the deadline, we are discussing a range of options both internally and with our P5+1 partners,” a senior State Department official said on condition of anonymity, adding, “An extension is one of those options.”

Following his talks with Zarif, the top US diplomat had a bilateral meeting with Russian Foreign Minister Sergei Lavrov. There have been no reports on the details of the meeting yet.

Before talks with Kerry, Lavrov also had a meeting with his German counterpart Frank-Walter Steinmeier.

“If there isn’t quite a conclusion, we will have to search for possibilities to ensure that nothing breaks off here and the process can be continued,” Steinmeier said.

The Iranian foreign minister and his Russian counterpart have also begun their own bilateral discussions.

The French Foreign Minister Laurent Fabius is also scheduled to have a working dinner with Kerry, Steinmeier, and British Foreign Secretary Philip Hammond as well as Catherine Ashton, the EU’s nuclear negotiator.

“There are still differences to overcome, but that’s the job we have to do,” Fabius said after his arrival in Vienna late on Sunday.

Iran and the Sextet of world powers — Russia, China, France, Britain, the US, and Germany — have been holding talks in Vienna over the past six days to hammer out a comprehensive deal on Tehran’s nuclear program. Diplomats say the two sides have made progress but big gaps still remain.