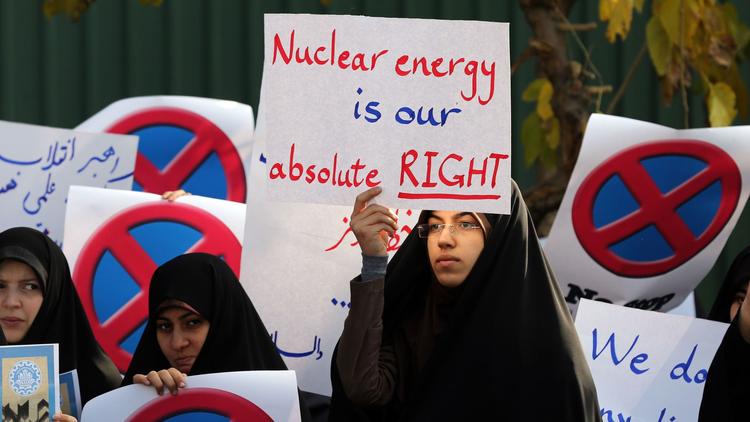 A student holds a placard during a demonstration Sunday in Tehran to show support for Iran’s nuclear program. (Atta Kenare / AFP/Getty Images)

Iran and six world powers on Sunday began a frantic round of meetings in search of a deal on Tehran’s nuclear program, hoping that the approach of a negotiating deadline at midnight Monday would draw last-minute concessions.

Despite signs that a comprehensive deal is not yet within reach, Secretary of State John Kerry met with Iranian Foreign Minister Mohammad Javad Zarif and European Union envoy Catherine Ashton for a fifth time in the round of talks that began Tuesday. Kerry met for an hour with Saudi Foreign Minister Saud Al Faisal, and was scheduled to meet again with Zarif, before dining with Ashton and the foreign ministers of France, Britain and Germany.

The two sides are seeking a landmark deal that would give Iran relief from tough international sanctions if it agrees to restrictions to ensure that it doesn’t gain a bomb-making capability. Such a deal could ease a top security threat and open the way to a better U.S.-Iran relationship.

Iran and the six powers remain divided on a few stubborn issues, but they are hoping that, following the traditional pattern of negotiations, the deadline will reveal how far each side is willing to go.

Diplomats for each side insisted Sunday they remained focused on making a breakthrough, although privately there were also hints that diplomats were thinking about how to extend the talks if the gaps can’t be overcome.

President Obama, in an interview with ABC News’ “This Week,” seemed to signal that he thought a deal unlikely, saying that “the gaps are still significant.” But he argued that the negotiations of the past year have been beneficial, because they have been based on an interim nuclear deal that has temporarily halted some of the most worrisome parts of the Iranian nuclear program.

The bar they have set appears to be too high to enable a deal.- Mark Fitzpatrick, nonproliferation specialist, International Institute for Strategic Studies, discussing conservatives in Iran

Administration officials have told lawmakers that they will seek to extend the talks by continuing the terms of the interim deal signed one year ago, rather than by seeking to negotiate a new deal, congressional aides said. That interim deal gave Iran some limited sanctions relief in exchange for its agreement to halt certain nuclear activities.

Extending the current terms would be the quickest and simplest way to keep the talks alive for a few months at least, analysts say.

The six world powers could also seek to sign a “framework agreement” that would lay out areas where the two sides have come to terms but haven’t had time to iron out all the details.

Ilan Goldenberg, a recently retired State Department official who is now with the Center for a New American Security, a think tank, predicted that if such an agreement was reached “it would almost certainly have to include the rough outlines of all the key elements.” Such a deal would be historic, but since it would require a major breakthrough it is less likely than a simple extension, he said.

Meanwhile, in Iran, where conservatives and reformists have been sharply divided over the benefits of a deal, there are signs that conservatives are now supporting an agreement because Iranian negotiators have laid down a tough set of demands.

For example, provincial prayer leaders in Iran were unanimous Friday in expressing support for Zarif’s team in Vienna. The imams are appointed by Iran’s Supreme Leader, Ayatollah Ali Khamenei, and their views reflect his own.

E’temad, a reformist newspaper, described this backing as “unprecedented.”

The leaders of the Iran Revolutionary Guard Corps, the hard-line Javan newspaper and Iran’s army have also offered words of support for the negotiating team in recent days.

Mark Fitzpatrick, a nonproliferation specialist with the International Institute for Strategic Studies, in London, said support from these conservative voices indicates that “the various factions in Iran have come together in a general consensus about what they have to have from the negotiations. The bar they have set appears to be too high to enable a deal.”

Yet, he added, this broad support “may give Zarif some latitude for maneuver.”

Israeli Prime Minister Benjamin Netanyahu, after a phone call with Kerry, said he understood that the deal would enable Iran to keep thousands of centrifuges, and urged the six world powers not to sign a “bad” agreement.

“There is no reason why it should be left with thousands of centrifuges that could enable it to enrich uranium for a nuclear bomb in a short time,” Netanyahu said before his weekly meeting with his cabinet.