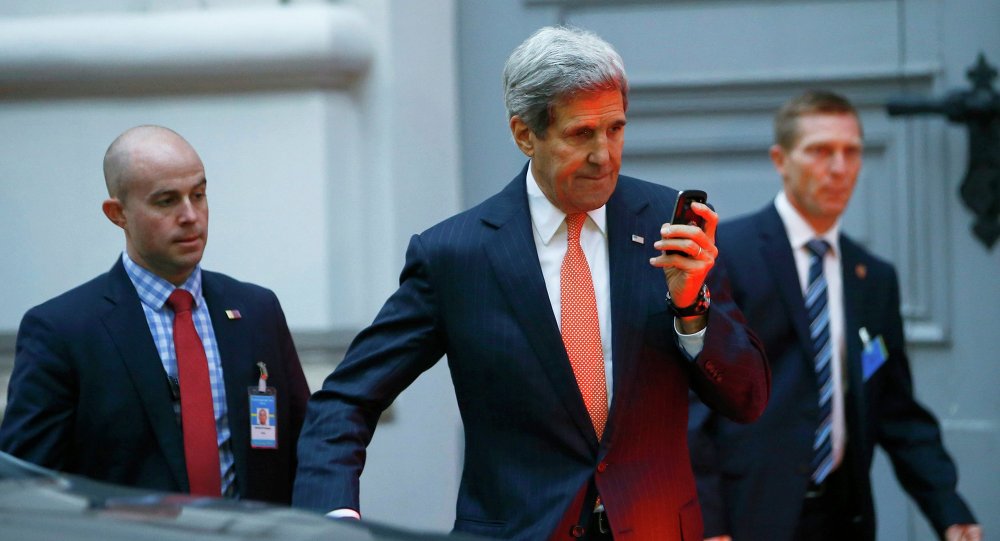 US Secretary of State Kerry will also reportedly meet with the Foreign Minister of Saudi Arabia Saud Faisal to inform him about the course of the talks.

VIENNA, November 23 (Sputnik) — US Secretary of State John Kerry is currently holding talks with German Foreign Minister Frank-Walter Steinmeier within the framework of negotiations between the P5+1 group of international mediators and Tehran on Iranian nuclear program, a source in the US delegation told RIA Novosti.

Kerry will also reportedly meet with the Foreign Minister of Saudi Arabia Saud Faisal to inform him about the course of the talks.

“Kerry will meet with Saudi Foreign Minister on Sunday to update him on talks,” a source close to the US delegation told Sputnik.

Earlier in the day, a source in the Russian delegation told RIA Novosti that Russian Foreign Minister Sergei Lavrov will be arriving in Vienna on Sunday, as well.

The final round of talks on the Iranian nuclear program between Tehran and the P5+1 group of international negotiators comprising Russia, the United States, the United Kingdom, France, China and Germany, began in Vienna Tuesday.

Tehran claims its nuclear development is aimed purely at civilian needs, such as meeting the country’s growing energy needs. However, the West suspects Iran of developing a nuclear weapon under the guise of a peaceful program. Iran’s earlier nuclear activities triggered the imposition of sanctions by the UN Security Council, the United States and the European Union.

In 2013, international negotiators agreed to reach a long-term deal with Tehran that would guarantee a peaceful nature of the Iranian nuclear program by July 2014; however the deadline was later postponed to November 24.