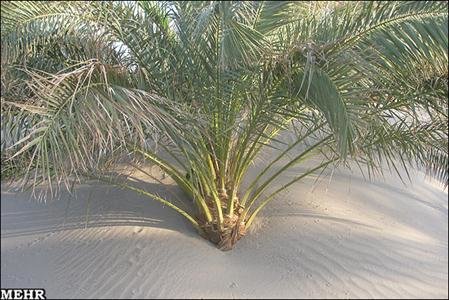 Since the distant past, in central deserts of Kerman, people have been fighting for life with the difficult climate of the desert; now, however, the fight has a definite winner; it is wind and sand dunes, which Mehr News correspondent report shows, have claimed people’s homes in desert regions of Kerman Province.

The northern and eastern part of the province is where the central desert of Iran now extends; an arid region where in the first look, it seems impossible life would burgeon; but people would belie the speculation, since they have won the title of ‘guards of the desert’ by adopting to the climate through growing palm and citrus fruits.

Precipitation figures show that Kerman is located in a dry band; some of cities of the province have not seen rain for years, thus left to their own means in fighting the vicissitudes of living in a desert; however, difficulties has awaken the innovative means of these people; they have worked in local canals called ‘qanat,’ to share and store water, a phenomenon which secured the civilization in deserts.

However, drastic climate change in east of Kerman now challenges people; one such challenge is Sistan’s ‘120-day winds,’ now extended farther west to affect provinces eastern cities more than before, with more windy days; cities now face wind which they had not seen in the past.

Mohammad Khawrazmi, an environmental activist told Mehr News correspondent that the province was inflicted with heavy tolls in terms of costs of facing sand storms; “the damage affects roads, agriculture, railroad, farms, and other city and rural structures,” he says. “Mere inaction would only help desert to move forward, claiming villages in its path in the frontiers of the desert,” he adds.

“Local people have now depleted their capabilities; the drought and reduced underground water due to sand dunes push back people in Reigan, Narmashir, Fahraj, and Bam on daily basis,” Khawrazmi says, “tens of centers of wind erosion are active in east of the province even in the vicinity of Kerman; it demands more and more care and action from authorities, first and foremost, to attract investments to the province; now however, villages have been evacuated, creating threats to larger cities in east of the province,” he believes.

Mayor of Rigan told Mehr News correspondent that the region’s agriculture was the first victim, inflicted with damages of sand storms annually, which he believed requires planning and budget.

Hassan Dehgan said that drought and deforestation contributed to desertification. “In southwest of the city the danger is serious; sand claims now people’s homes,” he added.